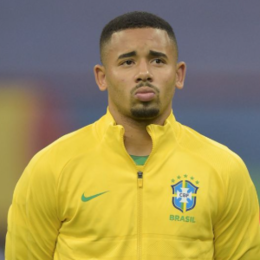 Gabriel Fernando de Jesus is a Brazilian football player currently playing as a forward for Premier League club Manchester City and the Brazil national team. Gabriel is a pacey striker who can play in any position of the front three.

Footballer Gabriel Jesus is currently dating his gorgeous lady named Raiane Lima. The pair have not yet decided to tie the knot. However, Raiane also lives together with her man at Jesus' home. To be more precise, Gabriel's mother, Vera Lucia, also can't wait to make Lima her daughter-in-law. 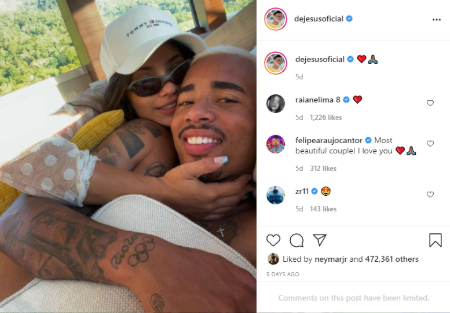 The Manchester City star's girlfriend has a strong bonding with her to-be mother-in-law. Both Vera Lucia and Raiane Lima have followed each other on Instagram. Gabriel has never been married, and he does not have any children either. The kids displayed on his Instagram wall are of his nephews and nieces.

Past Affair with Fernanda Queiroz

Meanwhile, before Raiane Lima, Gabriel Jesus dated the stunning Fernanda Queiroz who also lived with her ex-boyfriend at his mansion in Cheshire. They started dating in the summer of 2019. Moreover, the pair switched to the UK from her home in Brazil to live with the athlete. 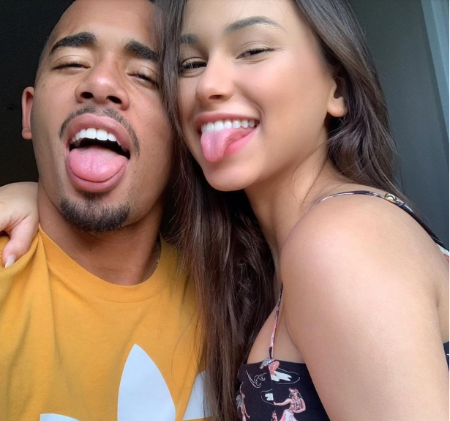 Gabriel Jesus dated Fernanda Queiroz for less than a year. SOURCE: The Sun

Sadly, right after she jetted home to see her family after Christmas, the City ace decided to end their relationship. Jesus unfollowed her on Instagram and soon deleted snaps of them together by mid-2020 confirming their split.

How much is Gabriel Jesus' Net Worth?

Gabriel has an estimated net worth of around $3 million with a weekly salary of no less than $101,684. Jesus also earns from ads, sponsorships, and endorsement deals. Not to mention, Gabriel already endorsed brands Nike and Adidas. Additionally, he is fond of lavishing cars and owns Mercedes Benz and Bugatti Veron.

Gabriel began his career by signing a youth contract for Brazilian club Palmeiras at the age of 16. He scored 54 goals in 48 matches. In 2014 he signed for the professional senior team contract with the same club.

In fact, Jesus showed his amazing performance in the 2015/2016 season with Palmeiras by scoring 21 goals which made his transfer to Manchester City. Impressively, Jesus made $39 million from the city during August 2016, but in January 2017, his transfer was finalized due to a work permit.

Likewise, the football champ made his premier league debut against Totten ham Hotspur in a 2-2 draw. Gabriel scored one and assisted Man city in its win against West Ham in his first full game.

Further, Jesus scored his first goal in the Champions League in a 2-1 loss against Swiss club FC Southampton, guiding the city to 100 points in the Premier League table. In the 2017/2018 season, Jesus scored 17 goals in 42 appearances for Manchester City as they won Premier League and the Carabao cup.

Gabriel was a part of the squad that finished runner-up in 2015 under 20 World Cup. He was selected in the senior team to injure Douglas Costa but missed the final selection due to issues regarding his U.S visa.

Jesus was then the top scorer in the CONMEBOL section for World Cup Qualifiers as he scored 7 goals in 10 matches. Jesus was included in the 23 man squad of the Brazil National Team for World Cup Russia 2018.