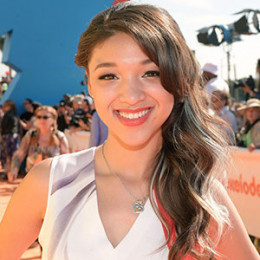 Gabrielle, television and film actress, singer and dancer, best known for her role in Nicky, Ricky, Dicky & Dawn for her role as Josie. She was born to multi-racial family, Japanese and African-American father and Filipino and Scottish mother. Her parents met in Air-Force. She has older sister. She knew she wanted to be actress at the age of 4 and has signed with her first agent at the age of 11. She has guest started many series such as Liv & Maddie, Austin &Ally and The Thundermans. She has also worked in numerous commercial, independent films and voice-overs.Along with acting, she is an excellent student who enjoy school.

She might be dating Aaron, cause it has not been revealed if they are in relationship. She frequently posts her pictures along with him on Instagram. She is not married yet so, she don't have spouse nor children and no doubt about her getting divorced. Even after being popular and successful, she has managed to maintain her personal life very low profile.