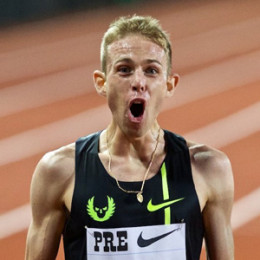 An American long-distance runner, Galen Rupp is one of the pride of his country. He is today a thriving player after breaking numerous records in his lifetime. The devoted Catholic personality won several medals from many of the marathons he participated. Rupp is also a world-class Olympic runner and also is the first American to bring a medal in the home country winning the 10,000-meter race.

Galen Rupp was born on 8th May 1986 in Portland Oregon with the birth sign of Taurus. He is the son of Greg Rupp and Jamie Rupp. He is an American and belongs to the White ethnicity.

Right from his school days, he was involved in many competitions and won most of them as well. He set the junior and high school records in America in the marathon. During his initial phase of career he was coached by the American marathon king, Alberto Salazar and with his coaching skills, Rupp successfully won most of the races.

In 2003, he participated in the World Youth Championships but could not win it but secured the 7th position. During the same year, he won the Pan American Junior Championships. He was then about to set his own record in the Foot Locker Cross Country Championship but didn't succeed however secured the second position.

Moreover, in 2004, he won 5000m at the Stanford Cardinal Invitational with the timing of 13:55:32 which became the fourth best in the history of the US. Also, he again broke another record of Rudy Chapa’s US junior at the Oregon Twilight Meet in 2005 for 10,000m with a timing of 28:25:52 which is still one of the unbreakable records.

After that, he landed the second position in the 10,000 m at the NCAA Men’s Outdoor Track and Field Championship. During the same year, he again broke the record of Gerry Lindgren’s US junior in 3000m.

In 2006, he secured a 5th and 6th position in the 3000m and 5000m at the NCAA Indoor Track and Field Championships. After that, he also took part in the NCAA Cross Country Championships and secured the 6th position with the timing of 31:43:00.

By 2007, he started playing like a real winner as he made many personal best and broke records as well hence became the seventh fastest time in the US history. Furthermore, he made his debut at the 2007 World Championships in Athletics and secured 11th place in the 10,000 m race. He placed the second position in 10,000m at USA Outdoor Track and Field Championships.

Moreover, by 2008, he participated in the Olympics as well. He finished with a 13th place in the 10,000m at the 2008 Olympics with US Olympic record timing of 27:36:99. He also placed 1st in NCAA Cross Country Championships and placed 2nd in the US Olympic Trails in the same year.

In 2012, he secured 7th position in the World Indoor Championship and secured 2nd place in the Olympics Games. During the same year, he won the US Olympics Trails twice and secured 3rd place twice in the USA Indoor Track and Field Championships.

In 2013 also he competed in the World Championships, USA Outdoor Track and Field Championships and secured 4th, 8th and 1st, 2nd position as he participated twice in both competitions.

Furthermore, in 2016, he placed 2nd in the Olympic Games and placed 1st in the US Olympic Trials. In 2017, he placed 2nd in Boston Marathon and 1st in Chicago Marathon. Also, secured 1st place in the United States 20km as well.

Apart from all these he also has entered in the 2018 Clearwater Distance Classic 50k schedule which is to be held on 21st January 2018.

Rupp and his current wife, Keara Rupp met for the first time at the University of Oregon. Mrs. Rupp was also a long distance racer at Oregon and used to travel with him in every event just to support him.

After several years of relationship, the high school sweethearts finally got married in 2010 in a private ceremony in the presence of limited guests including close friends, relatives, and families. Today, the pair is together living happily, and Rupp gives all the credit to his wife for his successful career.

The couple welcomed their twins in July 2014 and became parents for the first time. The couple even posted the pictures on their social media with their two adorable twins. Moreover, the news came out in the last year that the pair is expecting their third child in October, but till today no such information is disclosed by both of the couples.

Besides these, he is one of the devoted Catholic and used to make the sign of the cross before and after the race in which he participated.

Rupp with numerous record-breaking performances might have an estimated net worth in millions. He has won both national and international competition from which he must earn a decent amount to maintain his lavish lifestyle.

After dating for years since their college days, the pair Galen Rupp and Keara Rupp got married in 2010 in an intimate ceremony.

Grayson Rupp is one of the twin children of Galen Rupp and Keara Rupp who was born in 2014 with the weight of six pounds.

Keara Rupp gave birth to twins in 2014, among them Emma Rupp is the younger one due to some seconds. She also weighed six pounds during her birth as her brother.