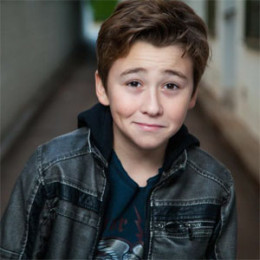 American actor and recording artist, Garren Stitt is best known for his portrayal of Oscar in American daytime television medical drama, ‘General Hospital.’ His fame furthered when Stitt appeared as Connor in the popular comedy series, ‘Nicky, Ricky, Dicky and Dawn’ (NRDD), aired on Nickelodeon. Stitt is one of the many ‘Andi Mack’ actors to have featured as a guest artist on ‘NRDD.’ He made his big screen debut in the movie, ‘Bukowski.’ Stitt also cast in the movie, ‘No Ordinary Hero: The SuperDeafy Movie’ alongside Marlee Matlin.

Garren Stitt was born on 21st January 2003 in Alexandria, Virginia, United States of America. He belongs to white-American ethnicity/race and holds an American nationality.

Later, Stitt’s family moved to Los Angeles, California, where he was exposed to show business at a very young age. He was an extrovert right from his childhood and was popular in his school.

Stitt took an active part in his school’s extracurricular activities. His mother also recognized his talent and encouraged him to become a child artist on television.

Garren Stitt began his acting career at the age of eight, cast in commercials and TV series. In 2013, he appeared in a TV commercial for Volkswagen. The advertisement caused quite a stir in the market which paved the way for Stitt to become a recognized child artist.

The commercial’s success got him the role of Connor in American comedy television series, ‘Nicky, Ricky, Dicky and Dawn’ which was premiered in September of 2014. The comedy series became popular among kids and boosted Stitt’s ratings in the entertainment industry.

Stitt got his next major TV role, Oliver Jacott, in American police procedural drama series, ‘Rosewood,’ which was created by Todd Harthan. After that, he had become a familiar face and had proved himself as a versatile actor.

Stitt was then given a recurring role of Marty in American comedy-drama television series, ‘Andi Mack’ which was created by Terri Minsky and was first aired in April of 2017.

In 2015, Stitt made his debut in the movie, ‘Bukowski.’ He also cast in the movie, ‘No Ordinary Hero: The Super Deafy Movie’ along with actress, Marlee Matlin. His performance earned positive reviews and made him a young celebrity.

Stitt also appeared in other TV shows include ‘Up in Arms,’ ‘Unusual Suspects,’ ‘Girl Crazy,’ and ‘Morbid Minutes.’ He also featured in a host of short movies such as ‘Love Triangle,’ ‘Designer Pups,’ ‘Is That a Gun in Your Pocket,’ and ‘Death is a Salesman.’

Stitt is also a recording artist who has performed in the series ‘GH,’ aired on the ABC network. His song ‘Last Time’ can be heard on Sound Cloud and is popular among teenagers.

Stitt has posted a number of his videos on YouTube that have earned him many fans. His ‘The Lady in Pink Show’ video was widely viewed on social media.

Garren Stitt is very young to be fall in any relationship, and that might be the reason he attains his all focus towards his career building.

Presently, Stitt is working on his upcoming series, while trying to make some time for his studies as well. He intends to make acting as his full-time career in the future.

A famous child actor, Garren Stitt has cast in some movies and television series and earns a decent amount of money. His estimated net worth is $500k.