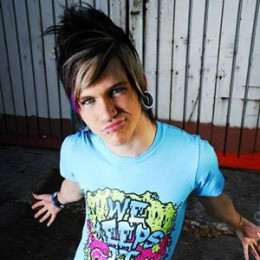 Garrett Ecstasy was the "screamer" in the band Blood on the Dance Floor but now he owes his new project, a band called Boys Talk Trash. He got famous by the name Garrett Ecstasy which he kept it from the name of drug 'Ecstasy'.

Garrett Ecstasy is openly gay. Previously, he was rumored to dated J'ayy Von' but no official confirmation has come about it.

As he was addicted to drugs, he frequently used them while practicing. He also accused Dahive of raping 11 years girl Jessi Slaughter but turned out to be a rumor.

Garrett Ecstasy earns a good sum of the amount from his singing career.

Garrett Ecstasy studied at DeLand High School in Deadland, Florida. Garrett wasn't the first screamer in their band but he grew up as a screamer after Matty M. left the group.

Garrett was very famous in the band BOTDF but left the band at the end of 2009 after he had a fight with Dahvie.