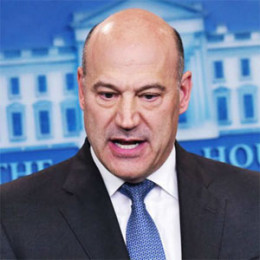 Gary Cohn is an American investment banker who is popularly known as Globalist Gary and Carbon Tax Cohn. He is also known for being the Chief Economic Advisor to President Donald Trump and has worked with Goldman Sachs for 26 long years. During his involvement in the Goldman Sachs' company, he was promoted in the position of a Chief Operating Officer and it's President. He is the founder of the New York University Child Study Center and is a member of the Jewish Federation of Palm Beach County.

Gary Cohn is happily married to painting, collage and jewelry artist Lisa A Pevaroff. They together have three children and live in New York City.

Gary Cohn was born 'Gary David Cohn' to Jewish parents Victor Cohn and Elena Cohn on August 27, 1960, in Cleveland, Ohio, United States. His father worked as an electrician who later turned out to become a real estate developer. At a young age, Cohn suffered from a disorder called dyslexia which made him difficult to read and write. Due to this, he had to change school four times until he reached grade six. 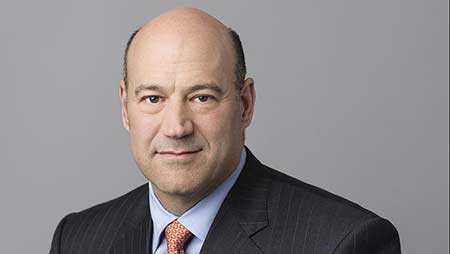 For schooling, he attended Gilmour Academy where he received his primary and secondary education. To pursue his bachelor's degree he enrolled at the American University's Kogod School of Business in 1979. On May 1982 he graduated from the university with a degree in Bachelor of Science in Business Administration majoring in Real Estate, Urban Development, and Finance. After his graduation, he started working for the U.S Steel in Cleveland where he sold aluminum siding.

Gary Cohn is professionally an investment banker who served at the 11th Director of the National Economic Council where he worked as the chief economic advisor to President Donald Trump for a year in 2017. As everyone starts from scratch Cohn also had to walk each and every step to get to where he is today. He worked on Wall Street for some years and later on he was employed by Goldman Sachs in 1990.

Cohn gave 26 years of his life to the company with being promoted to his position from a Chief Operating Officer to President. For his amazing performance in this field, he was appointed as the Director of the National Economic Council (NEC) by President Trump on January 20, 2017. On joining the administration team of Trump he left Goldman Sachs. Regarding Trump's trade policy to impose import tariffs on Steel and aluminum on March 6, 2018, Cohn decided to resign from his position as a National Economic Council since their terms couldn't match.

He was succeeded by Larry Kudlow for the job. Cohn and his wife Lisa A Pevaroff-Cohn founded the New York University Child Study Center. He is among the member of the Jewish Federation of Palm Beach County.

Gary Cohn's exact net worth is not estimated but he is sure to have a net worth of more than $500 million. He took home a salary of $22 million and $21 million at Goldman Sachs in 2014 & 2015. While leaving the company he was handed a package worth mostly in Stocks and which summed up to a whopping $123 million.

He was paid $65 million in cash and $35 million in stocks to join Trump's administration. In 2018 as the Chief Economic Advisor in the Donald Trump's Administration he earned $30,000 as salary. According to the New York Times, his assets are worth between $252 to $611 million.

Gary Cohn is happily married to painting, collage and jewelry artist Lisa A Pevaroff. They together have three children and live in New York City. His parents thought he will be a truck driver growing up. His name was included in the list of politicians in Paradise Paper's allegations which was caught up in great controversy. 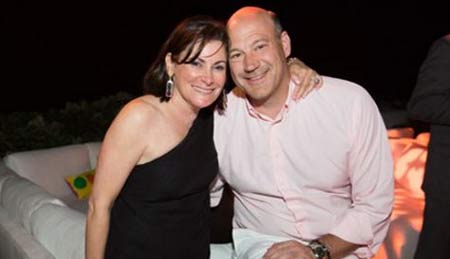 Gary Cohn with his wife Lisa A Pevaroff.
Source: wagpolitics

It was in November 2017, the International Consortium of Investigative Journalism revealed a set of documents containing 13.4 million confidential electronic papers related to offshore investments.

He is a huge supporter of Reviving Baseball in Inner Cities and is associated with Harlem RBI who does social works to help people. Cohn was made the chairman of the HJD Advisory Board at the hospital of Joint Diseases situated at NYU Langone Medical Center in 2010.

Gary Cohn is married to painter artist wife Lisa A Pevaroff Cohn. They live together with their three children.