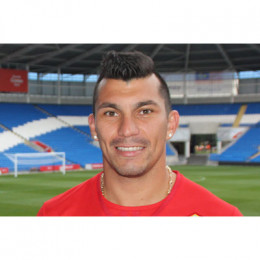 Gary Medel's father Luis worked as a gardener and his mother was a full time housewife raising four children - 3 sons and a daughter at home in Conchali, Santiago province. He is named Gary because his mother was a huge fan of Gary Cooper. He is nicknamed "pitbull" for his fierceness in the game. He has received 7 red cards for every 13.5 games after moving to Seville since Jan 2011. He is proud of his nickname and says, "People have the idea that the pitbull is bad dogs, but if you learn about it, you'll see it can be aggressive, but it is loyal. It bites when it has to bite."

In an interview done in 2000, Gary Medel mentions, "If it hadn't been for football, I would be stealing or trafficking drugs." He later claimed to be joking, however, Medel has a notorious history for allegedly making death threats outside a supermarket, shovelling a female journalist for which he was arrested and for drink driving as well. He is also known to be tasered at the parking lot by the police during a violent clash between the chilean players and the cops after the under 20 world cup in Canada. He was also banned for 6 months for spitting at an opponent and reacted viloently on the pitch with a Universidad Catolica team mate. He is currently in a relationship with his girlfriend Cristina Morales.