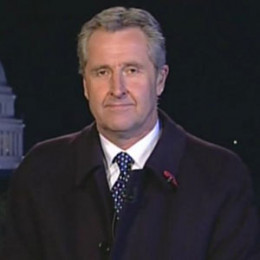 Geraint Vincent is a popular British journalist who works as a correspondent for ITV News. As a journalist, he has covered many stories such as Syrian civil war, the aftermath of the Arab Spring, and the relationship between Israel and neighboring states.

Geraint Vincent was born to RJ Vincent and Angela Vincent in Newcastle, Staffordshire.

After his graduation, Geraint began his career as a reporter at BBC Wales in Cardiff reporting for the BBC Wales Today. Later, he became Wales Tonight’s political correspondent covering the Welsh Assembly for HTV.

In 2002 Vincent joined ITN working as a news correspondent for ITV News. Throughout his career, he has reported on major events like Soham murders, The War in Iraq, famine in Niger, the 2006 FIFA World Cup in Germany, the 2007 Rugby World Cup, the Beijing 2008 Olympics and the Northern Bank robbery.

He also presented ITN's ITV Evening News and ITV News in early 2010. Furthermore, he became part of the ITV News team covering the Haiti earthquake in 2010.

In addition, he covered part of the Campaign 2010 and Election 2010 as a Campaign Wives Correspondent. He reported in Afghanistan followed by 2010 Copiapo mining accident. He then reported for the current affairs strand Tonight on ITV. As of now, he is working under the title of Middle East Correspondent for ITV News at Ten.

Geraint is private when it comes to his personal life and affairs. He hasn’t disclosed information regarding his girlfriend or wife. It looks like he is fully focused on building his career right now. As a part of his career, he enjoys traveling a lot.

Vincent must receive a decent amount as his salary as his estimated net worth is $200,000.