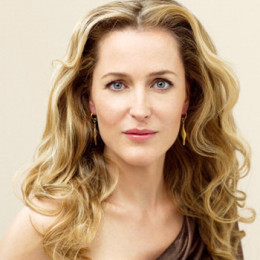 Gillian Leigh Anderson is an actress, known for portraying Special Agent Dana Scully in the hit TV series The X-Files. She has received several awards such as a Golden Globe Award, a Primetime Emmy Award and two Screen Actors Guild Awards. She has Irish, English and German ancestry. She was born to Homer Edward Anderson III, owner of a film post-production company and Rosemary Anderson, a computer analyst.

Moving on to her personal life, she has confessed herself of being heterosexual. Till now she has been married twice and both the time she got divorce with her husbands. Her first marriage lasted only for 3 years and her second marriage also remained strong for almost 3 years. She has a daughter with her first husband. She had dated few men in her past days and has raised two sons from one of her affair.

He is the first husband of Anderson. The couple first met on the set of The X-Files series, where Klotz was a assistant art director.

He is the second husband of Anderson, who worked as documentary filmmaker. They were married on Lamu's Shella Island, off the coast of Kenya.

She is the first child of Anderson, whom she gave birth at the age of 26.

He is the first son of Anderson, whom she gave birth at the age of 38.

He is the third child of Anderson, who was born safe and healthy.