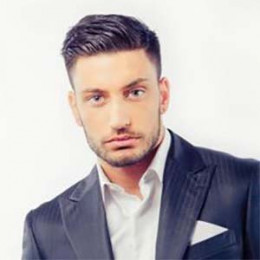 Giovanni Pernice is an Italian dancer and choreographer, who has won a number of dacing competitions. In 2015, he appeared as a professional dancer on BBC's 'Strictly Come Dancing' for its thirteenth series. Giovanni partnered with former Coronation Street actress and model, Georgia May Foote. Pernice began his dancing career at the age of fourteen at Bologna.

In 2016, Giovanni Pernice returned to Strictly Come Dancing for its fourteenth series. He was partnered with television presenter Laura Whitmore and was eliminated on the 7th Week and finished in 9th place. Giovanni and his 2015 dancing partner, Georgia May Foote had a brief romantic affair which ended in the mid-2016.

Popular dancer and choreographer ‘Giovanni Pernice’ was born in Italy on 5 September 1990. He is best known for his dance on the ‘BBC One’ dance series ‘Strictly Come Dancing’ who holds white ethnicity and Italian nationality.

Talented Giovanni Pernice belongs to the Sicily city of Italy but at the age of 14, he moved to Bologna to give more emphasize on his dance. Today he is one of the best dancers in the world and he was inspired by the reality television show ‘Come Dancing’.

Giovanni Pernice is specialized in Latin style of the dance form. Additionally, he was a winner of Italian 2012 Championship and beyond that, he won several competitions and titles.

In 2015, Giovanni Pernice appeared as a professional dancer on BBC’s for the 13th series of ‘Strictly Come Dancing’. In the show, he was paired up with actress Georgia May Foote where everyone loved their dance moves and chemistry. They succeed to reach on finals but finished as runner-up. Despite that, they participated as partners for 2016 strictly come dancing live tour.

In 2016 Pernice was again back in the ‘Strictly Come Dancing’ for its fourteenth series where he was partnered with television partner Laura Whitmore. They hold 9th place in the competition.

Giovanni Pernice dated his co-partner ‘Georgia May Foote’ of ‘Strictly Come Dancing’ but at the end of August 2016, they split away. According to the source, the real reason behind their separation was involvement of the third party in their relationship. However, they deny that rumors.

Net worth and Height

Giovanni Pernice is standing tall with the height of 5ft 10 inches. With his charismatic personality and amazing dance moves, peoples are crazy about him. He has thousands of followers on social sites as well.

Considering his amazing growth in a career he surely might have huge net worth gathered from his shows and live performance.