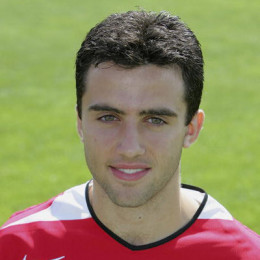 Giuseppe Rossi is an American-born Italian professional football player who is currently playing in the club Florentina and in the Italian National Football Team as a forward wearing jersey number 22. He started his youth carer at the Clifton Stallions in nearby Clifton, New Jersey, where he was born but later moved to Italian club Parma when he was 12. He made his professional debut from the club Manchester United in 2004. He is known for his attacking style and his technical and dribbling skills in he game.

Rossi is currently engaged to his girlfriend, Jenna Sodano. The couple has been dating each other since a long time.

He is active on social media and he frequently posts images with his girlfriend.

Giuseppe Rossi was born on 1 February 1987 in Teaneck, New Jersey.

He started his career playing in the Clifton Stallions and was signed by English club Manchester United when he was 17.