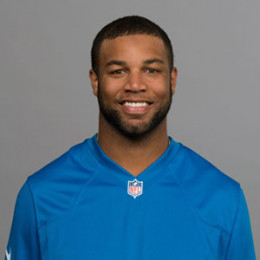 Football wide receiver, Golden Tate is the punt returner for the Detroit Lions of the National Football League (NFL). He is the son of Yolanda Tate and Golden Tate Jr, a former wide receiver at Tennessee State.

Tate attended Pope John Paul II High School.In 2011, he made 35 catches for 382 receiving yards and 3 touchdowns.In the 2009 season, Tate won the Biletnikoff Award also recognized as a unanimous first-team All-American. On 12th March 2014, he signed a five-year, $31 million contract with the Detroit Lions. On 9th June 2010, Tate was drafted by the San Francisco Giants in the 50th round (no. 1518 overall) of the 2010 MLB Draft, but did not sign.

Golden Tate dated Ashton Meem in 2013 and the couple broke up in 2014. He married Elise Pollard, a director of business development at Harvey Nash.

He married Elise Pollard, a director of business development at Harvey Nash.His wife is popular in business industry.