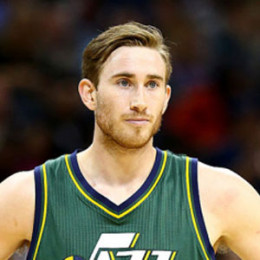 Gordon Hayward is an American professional basketball player who plays for the Boston Celtics of National Basketball Association ( NBA) in a small forward position. He used to play college basketball at Butler University for two seasons and led his team to a runner-up finish in the 2010 NCAA Tournament. Before playing for the Boston Celtics in 2017, he was selected by an American basketball team called Utah Jazz in 2010 and appeared in the team till 2017.

Gordon Hayward was born Gordon Daniel Hayward on March 23, 1990, in Indianapolis, Indiana. He was the son of Gordan Scott Hayward and Judy Hayward having a twin sister named Heather Hayward. He enrolled at Brownsburg High School in Brownsburg, Indiana where he played basketball.

In the 2007-2008 season, he was a senior so he was named as first team All-State. He played for the team Brownsburg made it to the Indiana Class 4A state championship. In his senior year, he scored in average 18 points, 3.6 assists and 8.4 rebounds in a game.

Gordon Hayward for his college basketball chose Butler University since the 6:30 am practice time there didn't disturb his major of Computer Engineering. He joined Bulldogs which was the Butler's team name as a junior and started playing for them.

At first, they lost many times but managed to win the Horizon League by 26-5. Hayward was able to average scores of 13.1 points and 6.5 rebounds in a game for which he was named Horizon Newcomer of the Year and first-team All-Conference. 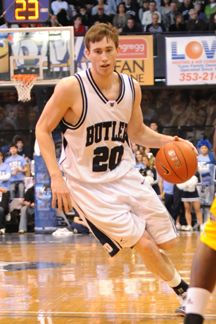 He was among team USA who took part in the FIBA Under-19 World Cup which happened in Auckland, New Zealand where the team played for head coach Jamie Dixon. In the tournament Hayward and his teammate, Tyshawn Taylor was honored by naming them All-Star Five of the event. His FIBA career brought with it many other good opportunities for him.

In the 2009-10 Horizon League season, he was named Horizon League Player of the Year and was also named a third-team ESPN The Magazine Academic All-American. Because of his good performance and as he led team Butler to the National Championship Game, he was renowned with the title MVP of the West Region.

Hayward was selected as the Top 20 pick in the 2010 NBA Draft before his college Butler's NCAA Tournament run. His parents were in a dilemma about whether to send him in the NBA or remain with the Butler. Then, Butler was able to reach the national championship game but lost to Connecticut Huskies. It was on April 14, 2010, when his father finally decided to send him in the 2010 NBA Draft.

Since Hayward was busy studying and preparing physically his father found him a trustworthy agent named Mark Bartelstein. He left his studies to remain in the NBA Draft and eventually on June 24, 2010, he was selected by the NBA associated team Utah Jazz as the ninth overall pick. Hayward was happy being selected in the Utah Jazz since he knew players there were hardworking and dedicated.

He was picked for the team because of his ball-handling skills, athleticism, and versatility. Former basketball players Jerry Sloan and Kevin O' Connor talked about Hayward being an exceptional player who knew the game very closely.

Hayward started playing for the Utah Jazz and delivered excellent performances. He came as a savior for the team during 2013 offseason when the team was losing against players like Al Jefferson and Paul Millsap. He managed to score some points to make the team catch up. Hayward scored some 37 points which were his career high score on January 7, 2014, which led to a win over the Oklahoma City Thunder.

He received a four year $63 million offer sheet from the Charlotte Hornets but Jazz signed him again in the same amount. In the month of November in 2014, he scored 33 points which were a season-high score which resulted in them winning against the New York Knicks. 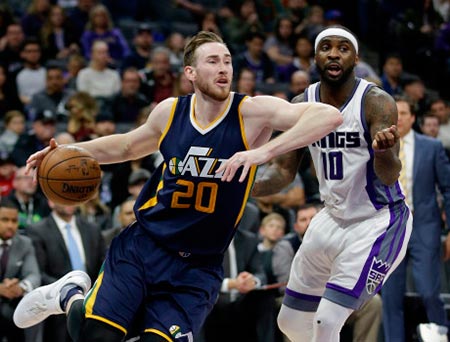 Gordon Hayward in action against the Kings.
Source: The Denver Post

Hayward was named a Western Conference All-Star reserve for the 2017 NBA All-Star Game on January 26. With this title, he became the first Jazz player who got named All-Star after Deron Williams who received this title in 2011. His new career high score was 39 which he scored on April 7, 2017, and won against Minnesota Timberwolves by 120-113.

Hayward is playing for the Boston Celtics after his exit from the Utah Jazz team. He announced on July 4, 2017, through a media platform called The Players' Tribune that he will join the Boston Celtics. After 10 days he was signed in a four-year contract of $128 million. While playing against the Cleveland Cavaliers in a regular-season opener Hayward fractured his shinbone of his legs dislocating his ankle. 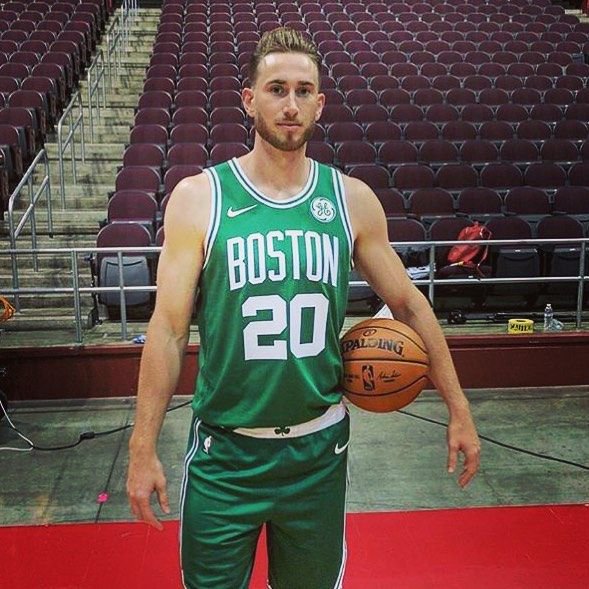 He fell down when he jumped to receive the ball from teammate Kyrie Irving and suddenly collapsed underneath his own weight. The fall was hard and Hayward had to undergo a surgery and did a second surgery in March 2018.

Hayward has an estimated growing net worth of $52 million. He earns an annual income of $15 million and his income has raised over 167% in the past years. He was signed in a four-year contract of $128 million to Boston Celtics.

As he has a million dollar fortune he has a luxurious house and some high brand cars. In 2015, he bought a gated estate in Rancho Sante Fe of more than two acres. The house is a Hacienda-style home measuring 7,550 square feet having six bedrooms and eight bathrooms.

Gordon Hayward is happily married to his lovely wife Robyn Hayward. The couple gave birth to their first child in 2015 and the following year a second child was born. One of her child's name is Charlie Margaret Hayward another one is named Bernadette Marie Hayward. His former relationships are not recorded nor the details related to their marriage ceremony is mentioned.

He signed an endorsement deal with Kingston Technology Corporation, Hyper X which is an Esports brand in May 2016. Hayward is a complete gamer and loves to spend his times playing video games. He has some games that he likes and among them, his favorites are IGN Pro League, StarCraft II, Clash Royale and League of Legends.

Many things to be thankful for this year! From my family to yours, Happy Thanksgiving!

Hayward remembers his father telling him to practice as a guard since he kind of believed that his height will stay 5'11 since both of his parents had a height of 5'10. As a 5'11 individual, he was sure to not gain a power forward so he practiced playing as a guard. Due to his height and other factors, Hayward was in the urge to leave basketball soon.

Mysterious it might seem but Hayward's height multiplied suddenly and he went onto have a 6'8 height finally. His tall height proved to be a huge merit since his profile bloomed and he started getting several scholarships offers from colleges. He chose Butler University among the other university like IUPUI and Purdue.

Gordon Hayward married Robyn Hayward in a private ceremony. They lived happily with their two children.

Gordon Hayward and Robyn Hayward gave birth to a daughter Charlie Margaret Hayward and they live a content family life.

Gordon Hayward and Robyn Hayward gave birth to a daughter Bernadette Marie Hayward and they live a content family life.