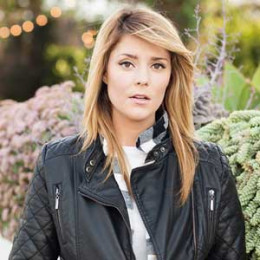 The successful YouTuber, Grace Helbig is also an actress, model, author plus a show host. Grace is earning huge fan following from her videos and shows. She has millions of followers on Instagram and Twitter plus millions of subscribers on YouTube too. She is hosting a show, Not Too Deep, The Grace Helbig Show for more than 100 of episodes. Grace is in relation with her long time boyfriend, Chester See.

Born on 27th September 1985 to father John Helbing and mother Theresa McGinis in Woodbury, New Jersey as Grace Anne Helbig. She was raised along with older brother, John and younger brother, Tim. During her childhood, she used to spend much of the time with her granny. At an early age, she was interested in gymnastic and athletics too.

Grace did her schooling from Gateway Regional High School, New Jersey. Moreover, she earned a degree in Contemporary Arts from Ramapo College, New Jersey. Helbig loved to make people laugh, and during college, she formed a sketch comedy group named, Baked Goods with her best friend, Michelle Akin. After that, she took improvisational classes from Peoples Improv Theater, New York.

In 2005, Grace participated in New Jersey USA beauty pageant and was one of the semi-finalists. She learned many things during the show including personality development and confidence development. She was also a medal-winning pole vaulter and a booming track star.

Grace started her professional career from YouTube. She began vlog of her house sitting on YouTube channel GracieHinABox. She then collaborated with her college roommate and started another channel called Grace n' Michelle.

Then in 2008 Helbig narrated Bedtime Stories, a short-lived animated series on My Damn Channel(an entertainment website). Her works were really appreciated and praised by the audiences as well the CEO and founder Rob Barnett. He offered her own show on the website which was named DailyGrace, premiered on April 14, 2008. Grace on October 11, 2010, launched her own TouTube channel DailyGrace which was a hit and gained around 2.4 million subscribers.

Besides this, she had also acted as an actress and model in many music videos and series. She was in the music video Barbie Eat a Sandwich as Barbie by band Care Bears on Fire. Later on, She appeared in web series, The Most Popular Girls in School and also in television series- Electra Woman and Dyna Girl.

Grace did several stage comedy in various countries like- United State, England, Canada Australia, Ireland and so on. For her marvelous contributions, she was praised with the Streamy Awards, 2016. Grace was nominated for more than 20 times for various awards till now and has won seven.

Helbig is recently hosting a podcast, Not Too Deep with Grace Helbig, on Soundcloud and iTunes and posts additional footage on her channel it'sGrace. She also ran created and hosted The Grace Helbig Show on E! till June 7, 2015.

Grace Helbig is in a relationship with her longtime boyfriend, an American YouTuber, singer and actor named, Chester See since 2014. Grace kept her relation secret for years from the public. Well, it looks like she likes to keep her affairs away from the camera.

Grace Helbig has an estimated net worth of $5 million in 2017. She is one of the top most paid YouTuber. She is earning well from her YouTube Channel, books and her shows too. As per her photos, she is living a high profile life and travels often.

Grace bought a bungalow in Hipster Northeast L.A. She also owns a cottage with two car garage, small two-bedroom in Silver Lake worth $900,000 in 2014 which is currently valued $990,000 in the market.