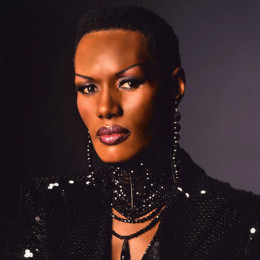 A Jamaican singer, record producer, songwriter, supermodel and actress who is better known for her single "Pull Up to the Bumper," which charted on number two position on the U.S. Dance Chart. She was raised by her grandmother. When she turned 13 years old she move to New York with her siblings. She studied theater at Syracuse University. She started her career in modelling from Yves St. Laurent, Claude Montana, and Kenzo Takada. She has appeared in popular magazines covers like Elle, Vogue, and Stern. In 1977 she was signed to Island Records from where she released her debut album "Portfolio". Her singles like "Private Life,", "I've Seen That Face Before (Libertango)," and "Slave to the Rhythm." helped her more to establish in Jamaican music. Beside singing she has also starred in the role of villain May Day in the James Bond film, A View to a Kill.

Grace Jones was born Grace Beverly Jones on May 19, 1948, in Jamaica to Robert W. Jones and Marjorie Jones. She is American and belongs to black ethnicity.

She was shy and skinny during her childhood days and was often teased by her classmates. At the age of 13, she moved to New York and joined the Syracuse University after completing her schooling. She was studying Spanish but she left the college in halfway to accompany a drama professor to Philadelphia.

Grace Jones signed with the Wilhelmina Modelling agency when she was 18. During 1975-76 she released a number of singles but unfortunately none of them were big successes. In 1977 she released her debut album, ‘Portfolio’ which contained her first big hit single, ‘La Vie en rose’.

After the success of her first album, she released her second album ‘Fame’ in 1978. The album’s lead single, ‘Do or Die’ became a huge club hit on the U.S. and Canadian dance charts.

The most successful album of her career, ‘Nightclubbing’ was out in 1981. It spawned the hits ‘Pull Up to the Bumper’ and ‘I've Seen That Face Before (Libertango)’.

After the success of her previous album, she brought out in quick succession in 1982, Living My Life which was a commercial success and reached Top 20 in several countries.

She appeared in numbers of small budget movies in minor roles for so long and after which she landed her first substantial role as Zula in ‘Conan the Destroyer’ in 1984.

In 1986, she made her first foray into production with her album ‘Inside Story’. She explored several elements of jazz, gospel and Caribbean sounds in the album.

She did not release any album during the 1990s. In 2008, after a period of almost 20 years, her album ‘Hurricane’ was released which includes, This Is, William’s Blood, and Love You to Life.

In December 2016, Billboard magazine ranked her as "the 40th most successful dance artist of all time".

She was in a relationship with Jean-Paul Goude, her personal bodyguard and together they are a parent of one child named Paulo. After her break-up with him, she tied the knot with Turkish Atila Altaunbay in 1996.

The couple was married for around 8-years before calling it quits officially in 2004. According to many sources, she was also married to a guy named Chris Stanley from 1989 to 1991.

But in her 2015 memoir, I'll Never Write My Memoirs, she disclosed not having any relationship with a man named Chris and her only boyfriend was a Muslim from Turkey, Atila.

She was also in a relationship with Swedish actor Dolph Lundgren. She also dated Danish actor Sven-Ole Thorsen.

During an interview with The Sun in October 2018, Lundgren revealed that he used to have group sex with Grace Jones and four to five other women.

According to Celebrity Net worth and The Richest, she has an estimated net worth of $7 million. The majority of her income comes from her career as a model, singer, and songwriter.

Professionally he is a film producer. Their marriage relationship didn't last long. After she was very unhappy with him for some personal reason she divorced him. According to her, she will never write her memoir of getting married to him.

He used to work as her bodyguard. He was from turkey. After few years of marriage they got divorced.

He is the only son of her, born from her affair. He has already been married and is a father of a daughter.