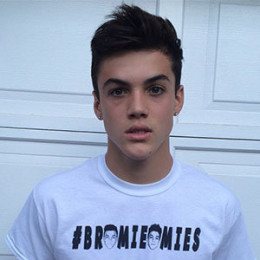 Grayson Dolan is a famous American Wrestler, Vine Star and Social Media Personality who is best known for his activities on Social video app Vine and YouTube. He gains huge fame from his video which he posts on youtube and vine along with his twin brother Ethan Dolan. Grayson is younger than this Ethan by twenty minutes. Their childhood was a bit hard for this duo as they were bullied by other kids at school. Grayson is a sports enthusiast, he once won a local wrestling tournament held at Madison Square Garden. These two has younger sister Cameron whom they introduced to the world through one of their videos.

Grayson is also known for his strong relationships with Chole Alison. He has also dated Hailey and is currently dating Sofia Olivera, fellow Viner. Beyond rumor, there is no exact information about him being a relation. It looks like he is just enjoying his ten years and speculations are rife that maybe he has a secret girlfriend He is too young to be married but there is a doubt that he has affair.