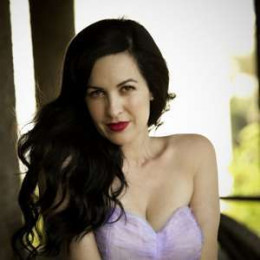 Grey DeLisele is a multi-talented American autoharpist, comedian, actor, singer, and songwriter. She is the daughter of truck driver George Van Oosbree and singer and musician, Joanna Ruth. Her parents separated when she was a child and was raised by her grandmother. DeLisele started working in theater and stand-up comedy and started performing from a young age. She wrote her first song at the age of six. She has also done voice acting for several animated video games and television shows.

Grey DeLisle married her longtime boyfriend, Christopher Delisle in 1992 but ended their relationship with a divorced in 1993. After separation with the first husband, she married country band member of Old97’s, Murry Hammond in 2002. She gave a birth to their first child Jefferson Texas Hammond on January 31, 2007. They divorced in 2010 due to personal matter. Later, she met Jared Griffin on Twitter and got married in 2012. The couple has one baby boy.

Her first husband was Christopher Delisle. They spend their marriage life for just a year and ended in divorce.

She married Murry Hammond; their courtship and wedding were featured in an episode of A Wedding Story. She gave birth to their son Jefferson Texas Hammond on January 31, 2007. They divorced in 2010.

Later she met Jared Griffin, and they got married in 2012. They met through Twitter and have one baby boy.

She gave a birth to their first child Jefferson Texas Hammond on January 31, 2007. He is the first child of her.

He is the second child of her.He has one step-brother.He is living with parents.His parents met through Twitter.