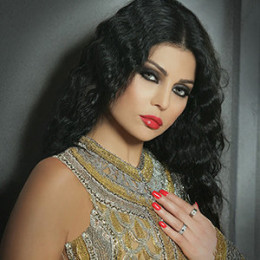 Haifa Wehbe was born on a small town Mahrouna of Lebanon. She was born to father Nadim Antar who was a Lebanese and an Egyptian mother from Cairo. She was born in a Muslim family. She is basically famous as a Lebanese singer and actress. She started her formal career in 2004. She first released her single Ya Hayat Albi which was a big hit. After the hit single, she published her first album "Baddi Aech". She began her film career in 2008 by working in the movie "Sea of Starts".

In 2009 she released her song "Baba Fein" after which she was accused for racism for her choice of words in the lyrics. She was also once rumored to have committed suicide in 2013 which caught the eye of the whole music industry in Lebanon. At the age of 16, she won Miss South Lebanon. She has been rumored for her several relationships and her relationship with Saudi businessman didn't go well. She later got married also, but that got ended as a failure too.

Haifa was married to the Egyptian businessman Ahmed for four years. They did not have any children.