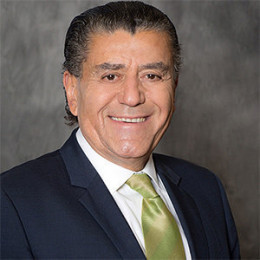 Haim Saban is an Israeli and American media proprietor, and television producer. An accomplished businessman primarily involved with business interests pertaining to financial services, entertainment, and media, and an estimated net worth of $3 billion, he is ranked by Forbes as the 143rd richest person in America. Saban is the founder of Saban Entertainment, producer, and distributor of children's television programs in the US such as Power Rangers. Saban started his career in 1966 as a bass player and manager with the rock band 'The Lions of Judah'. Saban’s father had been a sales clerk in a small toy shop in Alexandria. Haim, a long-time supporter and donor of many pro-Jewish and Israel causes, has stated his main goal in multiple interviews: "I'm a one-issue guy, and my issue is Israel."

Saban is married to Cheryl Lynn Saban. She was married to Saban in 1987 after working as his personal assistant for a year. She holds a Doctorate in Psychology and she currently serves as the President of the Saban Family Foundation. Two years later after their marriage, they welcomed their first child together. As a husband and wife, they have already welcomed two children. He also has two stepchildren, Tiffany and Heidi Lenhart.

He is married to a girl named Cheryl Saban who is a philanthropist, writer and advocate for women. She is best known to people as the wife of billionaire entertainment mogul Haim Saban. They together share two children and they have come a long way in their life.

He became father for the second time in his life in the early 1990s. He and his wife Cheryl Saban welcomed their second child together in 1991 via a surrogate mother and that time it was a daughter. And she appears to live in Beverly Hills, California.

He became father for the first time in his life in 1989. He and his wife Cheryl Saban welcomed their first child together that year via a surrogate mother and that time it was a son. He serves as a Director of Business Development at Saban Films, an affiliate of Saban Capital Group. and he lives in Los Angeles, California.