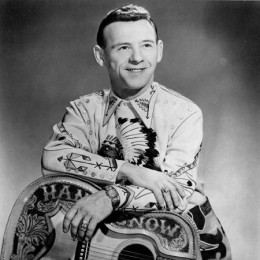 Clarence Eugene Snow, professionally known as "Hank Snow", is a Canadian country singer. He is best known for his songs: "I'm Moving On", "The Golden Rocket", "I've Been Everywhere", "I Don't Hurt Anymore", "Hello Love" and "Let Me Go, Lover!". Through out his career, he recorded 140 albums and charted over 85 singles on the Billboard country charts. He had a harsh childhood as his parents, George Lewis Snow and Marie Alice Boutilier weren't strong, financially.

Talking about Hank Snow's personal life, he was a married man. He was married only once and was happy with his wife but it was death that made them apart. He died of heart failure and his wife died of natural causes at Rainbow Ranch in Madison, Tennessee. The couple is survived by a son from their marriage. There are no any rumors and controversies related to Hank Snow's personal and professional life.

He is the only son of Snow and his wife. He has been married twice and has two children.