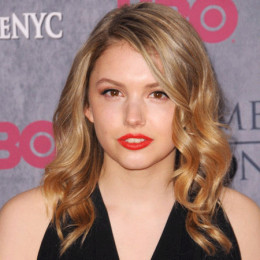 An English actress who is widely popular for her role as Gilly on the HBO television series Game of Thrones. Her father is a professor and her mother is a research technician. She holds English degree from Queens' College, Cambridge. When she was just 16 years she attended auditions for the E4 teen drama series Skins and eventually got role of Cassie Ainsworth, a creative but self-destructive teenager having food disorder. In 2008 she made debut in stage production including That Face, a West End production at the Duke of York's Theater. She also starred in the role of Sara in Danish film Bridgend which is based on the mystery Bridgend suicides of South Wales. She was awarded with Best Actress in a Narrative Feature Film for her role in that movie.

Talking about her personal life gorgeous actress hasn't married yet. After being so popular she has still managed to keep her private life out of sight of media and public. There is no record of her having relationship with anyone. Either she is hiding her relationship from public and media or maybe she hasn't found the perfect guy for her. Hope, she will get a loving boyfriend.