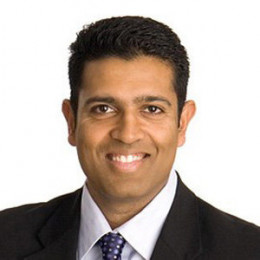 Hari Sreenivasan is a broadcast journalist from India. He is best known for being the host of a talk given by Narendra Modi, the Prime Minister of India at Madison Square Garden in Midtown Manhattan in 2014. After immigrating to the US at age seven, he attended Nathan Hale High School in Seattle, Washington, where he became a radio disc jockey. He was hired full-time in 1995 by NBC affiliate WNCN-TV in Raleigh and later moved to work for CNET. In 2004, he joined ABC News in New York City as a correspondent and concurrently co-hosted, the behind-the-scenes podcast ABC News Shuffle.

Besides his popularity as a journalist, Hari has been maintaining his personal profile low and secret. However, we do know that this tall, dark and handsome journalist is a happily married man. He has been married to Sucheta Sachdev. Reportedly, Sachdev is a music supervisor. Sreenivasan and his wife both being a Hindu, got married in their traditional attire following all the other customs.

He is in marital relationship with Sucheta Sachdev. And recently, we came to know that this duo has a toddler son. Beautiful snaps of this charming family were found on the website of Ann Price Photography in August 2015.