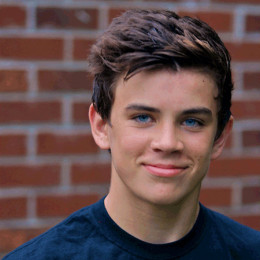 Benjamin Hayes Grier is a dancer and Popular Viner, best known as a member of Magcon Boys, a group formed in 2013. In 2014, he launched a clothing line with his brother, Nash and Viner, Cameron Dallas, through Aeropostale. He is currently a celebrity contestant of Dancing With The Stars (21st season), partnering with Emma Slater. He was born to Chad Grier, a football coach and Elizabeth Grier-Floyd.

Talking about his sexuality, he is straight. Currently he is single, but there were lots of rumors going on about him having a girlfriend. After posting fake images on the internet, he was suspected of being in a relation. These days he is much more focused on enhancing his dancing skills and winning the title rather than being with a girl. We can check out his vine collections @https://vine.co/Hayes.Grier.