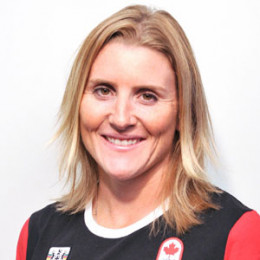 Hayley Wickenheiser is the Legendary Canadian Ice Hockey player known for her incredible scoring during her NHL career.

Hayley was born on August 12, 1978, in Shaunavon, Canada. She is the daughter of Tom a physical- education teacher and Marilyn. She grew up along with her brother Ross and sister Jane.

After graduating in Kinesiology, Wickenheiser enrolled at the medical school, the University of Calgary.

Hayley is a former ice hockey player. She is the first woman full-time professional hockey player who played in a position other than goalie. She played for Canada Women's National Ice Hockey Team throughout her career and was the team’s career points leader playing 276 games with 168 goals before retiring in 2017.

She played in Suomi-sarja League in 2002 followed by Mestis in 2003 and Division 1 in 2008. Other than that, she has played several International tournaments including  WWHC in 2009 and OLY in 2014.

Furthermore, EA Sports revealed that Wickenheiser would be among the first two real female hockey players in NHL 13. Her playable character in the game led her to be in any team of the user’s choice.

She competed in the 2000 Summer Olympics as a member of Team Canada softball player and worked as a Softball Analyst with CBC’s coverage of the 2008 Beijing Summer Olympics. Apart from that, Hayley is an author of the book outlining her training with team Canada entitled  Gold Medal Diary – Inside the World's Greatest Sports Event.

Hayley represented her native country Canada at the Winter Olympics five times. She garnered four gold and one silver medal and was given the title tournament MVP at the Summer Olympics in softball. She along with her teammates Caroline Ouellette and Jayna Hefford has broken the record for the most gold medals of any Canadian Olympian. They were known worldwide as the greatest female hockey player.

Wickenheiser's performance got her elected to the International Olympic Committee's Athletes' Commission on February 20, 2014. She was given the name an Officer of the Order of Canada by Governor General David Johnston on June 30, 2011. A new 14 million dollar recreational complex of her hometown, Shaunavon was named after her as Crescent Point Wickenheiser Centre.

Besides that, she is active in social work and is involved in organizations such as Lace ‘Em Up, JumpStart, KidSport, Project North, Right to Play and dozens of other organizations.She is the founder of the project that has been the creation of the Canadian Tire Wickenheiser World Female Hockey Festival, which hosts over 2,500 female hockey players from around the world in Calgary annually giving girls access not just to hockey, but to world-class educational sessions both on and off the ice.

Hayley Wickenheiser adopted a son named Noah and is residing with him in Calgary. Her son is 17 years now. As she has not been in any kind of affairs and relationship she is a proud single mother of her son.

Previously, Wickenheiser was caught up in rumor to be dating Ice hockey player Tomas Pacina. Not disclosing much of the information, she secretly dated him and broke up with her boyfriend in 2012. Tomas is the biological father of Noah.

The talented hockey player Hayley has earned a decent amount from her career. Her net worth is possibly not less than a million.

Noah Pacina is an adoptive son of Hayley Wickenheiser. His biological father is Tomas Pacina. He was adopted when he was 1 month old.