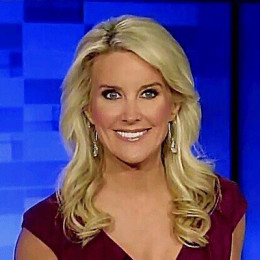 Heather Childers is an American television news personality recently working as a co-anchor of America's News Headquarters and is a co-host of Fox and Friends First for the Fox News Channel. She began her career in 1992 joining at WCNC-TV as a reporter and producer. She had attended Sharon Elementary School and is graduated from Myers Park High School. She has earned an undergraduate degree in English from the University of North Carolina.

Heather Start Childers was born on 7th January 1969 in Charlotte, North Carolina. She is popularly known as the co-anchor of America's News Headquarters and co-host of Fox and Friends First for the Fox News Channel.

At the age of sixteen, Heather had an accident, she rammed her Chevrolet Corvair into a tree on Queen’s Road West as a result, she had to do facial and oral surgery.

In 1992, Heather Childers began her career as a producer and reporter with Charlotte's local news broadcasting channel at WCNC-TV.Similarly, in 1995, she worked as a weekday anchor and news director for WFXL, a Fox affiliate in Albany, Georgia.In 1999, she moved to WLOS-TV, an ABC affiliate in Asheville, North Carolina.

Beginning in 2002, she became a news anchor for News 14 Carolina and came to Fox News Channel as a general assignment reporter in 2010.

Because of her Twitter post in April 2012, Heather Childers faced a controversy, she linked an article on the president, Barack Obama as well as the issue with Clinton family. The post created a criticism against the way she put the article forward leading her to reply as she was only seeking for an opinion.

Heather grabbed the Golden Viddy Awards for Best Female News Anchor, as well as Miss Charlotte-Mecklenburg in 1993 and she, is  Miss North Carolina, Preliminary Winner.

This pretty anchor, Heather Childers denies being engaged or married and doesn’t have a boyfriend as far as rumors about her are concerned. The reason for her secretive nature might be to eliminate news and gossip about her boyfriend.

The ever-smiling beauty is a charmer and is watched by millions of news watchers around the world. Her net worth is estimated to be around $3.5 million.

Heather’s has managed to achieve a number of fans on social networking sites like Facebook and Twitter, has much more to achieve in the coming years and it can be hoped that she shall do so with ease.