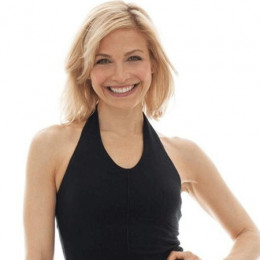 She is an American fitness and yoga trainer who is widely known as the creator and producer of Microsoft Bing Fitness Yoga. She is also a founder of CrossFlowX Yoga. She is considered as one of the most inspiring yoga teachers in the world by DoYouYoga. She has also made guest appearance in Veria Living TV. Beside as yoga trainer she is also an actress known for starring in movies like Confessions of a Shopaholic (2009), The Oranges (2011) and Acting Class (2005).

Exploring her personal life she is a married woman. She met her future husband through one of her mutual friends and later dated him and got married too. Till now couple hasn't given birth to any children. There has been no rumor about both of them having an extra marital affair with anyone which suggest that the couple is leading very happy married life.

There is no exact date when they got married. Couple's picture can be found in her Instagram page @heidikristoffer.