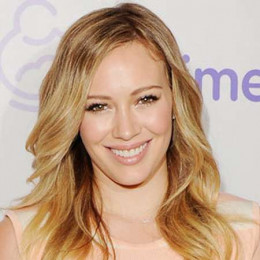 An American actress and singer who is better known for her role as the bubbly Lizzie McGuire on the series Lizzie McGuire which was aired between the years 2001 to 2004. She is daughter to Robert Erhard Duff and Susan Colleen. At very young age she was enrolled in acting, singing, and ballet classes. From age of eight she was home-schooled due to her acting career. She started her career by acting in several local theater companies like BalletMet production of The Nutcracker in San Antonio. In 2002 she was casted in Disney channel film Cadet Kelly. After signing with Hollywood production she released her album named Metamorphosis which was critically and commercially success. She has also starred in theatrical films like Cheaper by the Dozen, A Cinderella Story, Agent Cody Banks, and Cheaper by the Dozen 2. Besides acting she is also author and she has released novel named Elixir which has been titled as New York Times best seller. Currently she is signed with RCA Records for her fifth studio album "Breathe In".

She was married to former Canadian NHL center that she dated for three years. Couple was happily married and was parents of one beautiful baby boy too. Everything was going well until some kind of personal dispute arises between the couple and they got divorced. Reason behind their divorce has not been disclosed yet. Currently she is rumored to be dating Jason Walsh but the rumor has not been officially confirmed by both parties yet.

He is former NHL player. After dating for three years couple got tied in knot in marriage ceremony held in Santa Barbara, California. She has one child from the marriage. In 2014 it was confirmed the couple got divorced.

He is the only child from her first marriage. He is healthy kid. His picture along with his mother can be found in different sites.