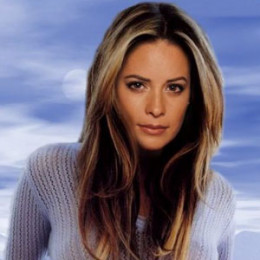 An actress and television producer, Holly Marie Combs was born on 3rd December 1973.She is a daughter of Lauralei Combs and David Combs.

The beautiful actress Holly Marie Combs was born on December 3, 1973, in California. She holds American nationality with Irish ethnicity.

During her birth, her parents were too young as her mother was just 16 years old and father was 17 and that might be the reason two splits up after two years of marriage.

Holly has traveled a lot along with her mother so she often changed her high schools. She is a certified Scuba Diver.

She has attended Beekman Hill Elementary school and then the Professional Children's School.

She landed her first major role at age 14 in Sweet Hearts Dance (1988), a comedy-drama film directed by Robert Greenwald.

Her first major breakthrough as an actress came at the age of 18, in the CBS television series 'Picket Fences' where she portrayed the role of Kimberly Brock. Later, she appeared in

Later, she appeared in Sins of Silence, a drama/horror television film. In 1998, she landed a lead role in The WB television series 'Charmed', in which she portrayed Piper Halliwell.

In 2016, Combs starred in a television movie 'Love's Complicated' premiered on the Hallmark Channel on 9th January 2016.

In 1993, she succeeds to win Young Artist Awards for her work in 'Picket Fences' as well as she got nominated for Screen Actors Guild Awards in a category of Outstanding Performance by an Ensemble in a Drama Series.

On 28th February 1993, Holly Marie Combs married an actor Bryan Travis Smith but due to some personal issue, they had divorced on 12th February 1997.

In November 2011, Combs filed divorce from Donoho because of irreconcilable differences.

Currently, Holly is engaged to her boyfriend Mike. She announced her engagement to mike last year on September 3rd, 2017. She shared a picture in which she is showing her ring. The couple has been dating for some time and even attends various events together.

As of 2017, Holly Marie Combs' net worth is estimated to be $14 million. She is also an owner of a house in Bell Canyon, California. The cost of a house in that locality is around $3 to $4 million.