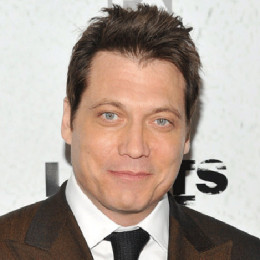 He is an American actor, writer and a producer best known for his roles in Fight Club, Three Kings, Men of Honor, Criminal Minds The Losers. He is the son of Julie Wilson, an American actress/singer and Michael McAloney, an Irish actor and Tony Award-winning producer. Trained in mixed martial arts. At the age of 14 he ran away from home to Los Angeles to become an actor but his parents tracked him down and sent him back to Ireland to boarding school.

Talking about his personal life, he is a handsome guy who has a lot of lady fans dying to be his partner but he is no more single. He has been dating a beautiful lady from a long time. The couple are often spotted together and seems to have a great bond between each other. However, he has not been married yet. There is no any such rumor or controversy that has let his stardom down.