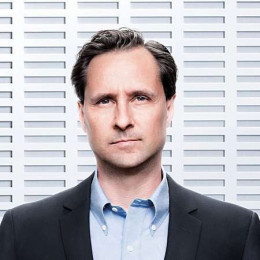 An American rock climber, biophysicist and engineer. From very young age he wanted to be climber. He was just 8 years old when he climbed 11,627-foot Mount Temple in the Canadian Rockies. When he turned 17 years he already held the reputation of the best climbers in the United States. He holds master's degree in mechanical engineering at MIT. He has also completed doctorate in biophysics from Harvard University. He is also associate professor in MIT's Program in Media Arts. In 2007 he hosted 13th Annual Heinz Award for Technology, Employment and Economy. In 2005 he was awarded with the Popular Mechanics Breakthrough Leadership Award.

In 1982 he took very difficult ice route in Huntington Ravine on Mount Washington, he along with his fellow climber had to pass three nights in ?20 °F and both of them were caught in a blizzard and became disoriented with severe frostbite. He lose his feet from the incident. Later he specialized prostheses with titanium-spiked feet that he designed by himself and he was able to stand on a inch width or in the width of a coin. Exploring his personal life he is married man. Together the couple is blessed with two daughters.

Professionally she is an author. She has been very supportive to Hugh throughout his career. Together they seem to be very happy with each other with mutual understanding.

She is the eldest daughter of the family. Her hiking achievements are described in her mother's memoir, Up: A Mother and Daughter's Peakbagging Adventure.