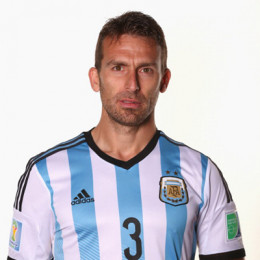 Hugo Campagnaro was born in Cordoba and is a member of Argentina National Football Team since 2012. His personal information regarding his childhood and details on his parents are not disclosed. He debuted his football career with the Club Deportivo Moron in the year 1998. He also got the opportunity to represent his country in the 2014 FIFA World Cup. Currently he has signed a 2 year contract with Internazionales.

Hugo Campagnaro is married to Naelio Campagnaro who is also from Argentina. They have two children, daughter Sofia Campagnaro and a son Andres Campagnaro. On 9th June, 2011 Hugo was involved in car accident in Cordoba province, which resulted in the death of his best friend and 2 other passenger. However, Hugo survived the crash because he had his seat belt on. There were rumors that Hugo was intoxicated during the drive but it was later dismissed.