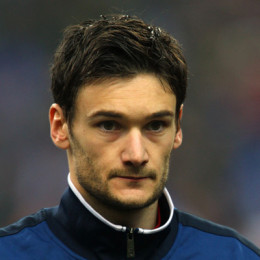 Hugo is a French professional football player who plays for Tottenham Hotspur, an English club as a goalkeeper and widely renowned as a captain of the France national team. His mother was a lawyer and his father is a Monte Carlo-based banker. He started his career from Nice, his hometown with OGC Nice. Lloris in his youth had played tennis until the age of 13 in which he was very good as well. He has gained national respect for his refusal of a bereavement leave offer from manager Frédéric Antonetti after the two days of his mother’s death. The French International has represented his nation at under-18, under-19, and under-21 level.

Lloris is married to lovely French Marine Lloris who is originally from Cagnes in 2012. They had been in a long term relationship and met during their school days.

The lovely couple got married two years ago, in Nice in front of the mayor, Christian Estrosi. The wedding was private and only families surrounded the event.

They have two children, both daughters named Anna Rose Lloris and Giuliana Lloris. Marine has a tattoo of her Llori's initials.

Hugo Hadrien Dominique was born on 26 December 1986 in Nice, France.

He plays as a goalkeeper and captain of the  French national team and the English club Tottenham Hotspur.

Captain of the French national team Hugo and Marine is now married for 2 years with two beautiful daughters.

Anna Rose is the first daughter of Hugo and Marine who was born on the 23rd of September 2010.

The couple welcomed their new child, baby girl Giuliana Lloris in the family on 2014 February.