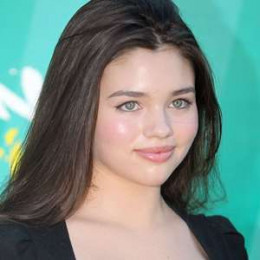 India Eisley is an American actress, who played the leading role of Sawa in the movie 'Kite' and 'Underworld' She was born to actress Olivia Hussey and musician David Glen Eisley. Her grandfather, Anthony Eisley was also an actor, best known as one of the detective leads, Tracy Steele, in the TV series 'Hawaiian Eye'. She has two siblings. She began her acting career from the age of twelve when she co-starred with her mother 'Headspace'.

According to her public profile, India Eisley is possibly single as there is no news of her having boyfriend or affairs. However, she has been rumored that she is dating her My Sweet Audrina co-star William Moseley. This beautiful actress has a net worth of $2 million dollars. She has two siblings: Actor Alexander Martin and Maximillian Fuse.