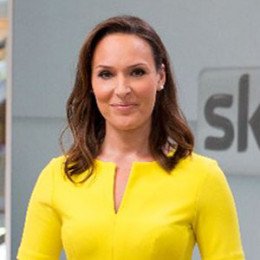 The television presenter and newsreader, Isabel Webster currently works at 'Sky News.' She is also a member of the Cystic Fibrosis Trust. She has been working with Sky News for more than seven years and made her strong presence on British networks. She also worked with British Broadcasting Corporation (BBC) as a presenter for the program Points West. The disappearance of flight MH370 and the Oscar Pistorius Trial was cover by her. She also has had the pleasure of interviewing famous personality including David Beckham, Kylie Minogue, Simon Cowell and the Prime Minister.

Isabel Webster attended St. George's Weybridge in Surrey before studying Politics and Theology at the University of Bristol. She gained her postgraduate diploma in Broadcast Journalism from City University.

Webster worked as a presenter and reported on the radio, for local, regional and national BBC News before joining Sky News in 2011.

She joined Sky News as their West of England Correspondent in 2011, covering stories including the floods, the trials of Ian Watkins and Vincent Tabak as well as the horsemeat scandal. In 2014 she replaced Charlotte Hawkins and was the host of the Breakfast show Sunrise. Isabel's first episode was broadcasted on 10th March 2014.

During her career, she has been involved in coverage of the Royal Wedding, the London Riots, the Arab Spring, the Queen's Diamond Jubilee, the Olympics, the disappearance of April Jones, the death of Margaret Thatcher, the chemical attack in Syria.

Isabel Webster is a married woman, and her husband is Liam Pearce. They tied the knot in 2014 in Surrey. The couple has a son named William Sinclair Pearce born at the Chelsea and Westminster Hospital on October 13, 2015.

She had suffered from endometriosis, due to which the couple was in doubt of being parents. And after the birth of their son, they were thrilled and excited to become parents. The couple featured in various magazines with a photo of their newly born baby.

Most of the Sky News presenter earns around $100,000 annually, so she may also have a salary around that much or even more. Now, coming to her net worth with that salary she might have an estimated worth in around seven figures.

The television presenter Isabel Webster married Liam Pearce in 2014. The couple is blessed with one healthy son.

The couple has a son named William Sinclair Pearce born at the Chelsea and Westminster Hospital on 13th October 2015.