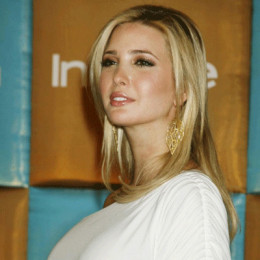 She is an American businesswoman, a writer, former model and an heiress of the Trump Organisation as her father is the owner of the business. She is currently working there as a Executive Vice President of Development & Acquisitions. She is involved in all the activities of the company related to its real estate and hotel management initiatives. She also owns the Ivanka Trump Fine Jewelry and The Ivanka Trump Lifestyle Collection.

Ivanka Trump is a married woman. She married to a businessman, Jared Kushner in 2009. She has three children from him. Looking at her dating history, she has dated couple of men for short and long time and has also came in rumor with few. She is living happily with her husband and children and she loves to spend her time with them. She has not been pulled in any rumors at present.

Ivanka Trump and her husband Jared Kushner have a combined net worth of $1.1 billion.

Ivanka Trump was born on  October 30, 1981, in New York City, New York, U.S. She is the daughter of Czech-American model Ivana (née Zelní?ková) and Donald Trump.

He is a businessman. He has the ownership in the Kushner properties as his father Cahrles Kushner is the owner. He has two children from his wife.

She was born very healthy and is very cute. She has a younger sibling. Her parents love her very much.

He was born very healthy and is very adorable. He has an older sister. He is loved by all in his family.