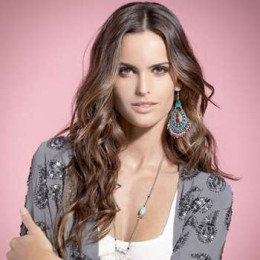 Maria Izabel Goulart Dourado better known as Izabel Goulart, is a Brazilian super model. Since 2005 till and till date, she has appeared as one of the Victoria's Secret Angels which made her rose to fame. She was placed no.100 in FHM magazine's list of the 100 Sexiest Women in the world in 2011 and in 2007, she won the Cool Magazine's "Toshiba Cool Planet Award" in the category of "Best Model". She is of Italian and Portuguese descent.

Accounting her personal life, she is yet unmarried and is single at the moment which is a very good news for all her male fans. It's not like she has dated anyone, as it is obvious she is so gorgeous and sexy that boys will fall for her just in a matter of seconds. She has dated a long list of men in her past days and was rumored of dating Paul Walker and Charlie Sheen. We can stay connected and check out her images on Instagram @iza_goulart.