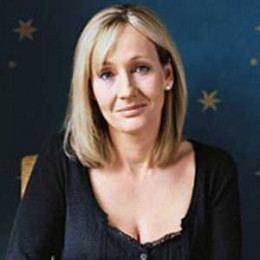 ''Anything's possible if you've got enough nerve'', J.K Rowling. The lady with such amazing thought has reached the state where she lacks nothing. The amazing author, J.K Rowling is the richest women in entertainment. In today's time, she is one of the most-read novelists. The journey from a jobless person to the richest person is too hard and complicated, but Rowling conquered with her courage and enthusiasm. She is now happy with her husband, Dr. Neil Murray with three children (one from her previous marriage).

Born on 31st July 1965 in Yate, Gloucestershire as Joanne Rowling to father, Peter James (a Rolls-Royce aircraft engineer) and mother, Anne Rowling (a science technician). She was raised with her sibling, Dianne Rowling. Rowling is the citizen of Britain and is of white ethnicity.

Her teenage life was spent unhappy because of her mother's illness and plus her father did not use to live with them. In 1990, her mother died at the age of 45 due to several diseases.

When J.K was four, she with her family moved to Winterbourne. She then joined a local school named, St. Michael's Primary School for her schooling. Rowling applied to Oxford University but was rejected and later on, she attended the University of Exeter to pursue a degree in BA in France. Later on, she graduated from Exeter University. Moreover, Rowling moved to London working in various charity committees including- International Amnesty. She also worked as a teacher too.

Rowling was fond of writing since childhood and also used to write stories and read it to her sibling. In 1990, she got an idea of Harry Potter while traveling with her boyfriend to London. They were stuck for four hours between Manchester and London, and Rowling thought about the character Harry Potter.

She started working with an old typewriter and finally completed after six years of hard work. At first, when she went for publishing, almost 12 publishers rejected to publish the book.

But she didn't quit, and after two years of struggle, finally, the first Harry Potter was published by a small publishing company, Bloomsbury Children's Book in January 1990 on Philosopher town with about $3000 advance. After that she was suggested to add an initial name to attract the male readers, she chose K as Kathleen her second name, in respect to her grandparents.

Happy Birthday to the queen herself, J.K. Rowling!!!!!!! Thank you so much for changing all of our lives! We wouldn’t be who we are without you, and we thank you for that. Happy Birthday!!!!

Soon after the publishment, Rowling became one of the best authors of the time. Moreover, the novels were adapted into a Hollywood movie. Rowling did not stop to write. After Harry Potter also she wrote dozens of books like- The Tales of Beedle the Bard, The Casual Vacancy, Cuckoo Calling, and so on. Many of the novels have turned into Hollywood movies like- Harry Potter, Fantastic Beasts, Where to Find Them, and so on.

Due to her amazing work, she was awarded various prestigious awards like- Nestle Smarties Book Prize for several years, Locus Award for Best Fantasy Novel. Further, she won the Hugo Award for Best Novel, Andre Norton Award, Kid's Choice Award for Favorite Book, Glamour Award for a writer, author of the year,  and many other. She has won almost 15+ International Awards.

When Rowling was teaching in Portugal, she met the journalist, Jorge Arantes.  They dated for a while, and in 1992 they got married.

The couple has a baby girl named, Jessica Isabel Rowling born in 1993. At the age of 26, Rowling faced a miscarriage. Moreover, they decided to end their relationship and separated in 1995, and the reason behind it was the abusing husband. She was really depressed and frustrated due to her divorced. So, to overcome depression, she started writing.

Rowling became a single mother and raised Jessica by herself. Furthermore, on 26th, December 2001, she got married to Dr. Neil Murray in Scotland. The lovebirds have two children, son David (2003) and daughter, Mackenzie (2005). Now, she is out of depression and is living a happy life with her husband and children.

J.K Rowling earned much more from her novels and books. Her novel was sold almost millions of copies and made millions. Rowling has an estimated net- worth of $1 billion at present context.

Rowling's house named, Killiechassie House is worth $ 2-3 million with 20 chimneys and medieval burial ground. She also owns Tasmania Mansion worth $10.7 million. Talking about her cars, she owns a Rolls Royce Phantom costing  $400,000 and Range Rover costing $70,990.

Rowling is also involved in many charities like- Anti- Poverty (where she is the president and is for mainly one-parent families), Multiple sclerosis (contributing money for research and treatment for multiple sclerosis), Lumos (children welfare). Besides charity, she is also involved in politics as she has provided 1 million euro for the Labour Party to support labor families.

Visit on marriedwiki.com for more detail.

J.K Rowling got married to a journalist, Jorge Arantes in 1992 and a year later they had a baby named, Jessica. Moreover, in 1995 they divorced because of abusing behavior of Jorge to Rowling.

In 2001 J.K Rowling married to Dr. Neil Murray in Scotland. They have two children named, David and Mackenzie.

On 27th July 1993, Jessica Arantes was born from mother J.K Rowling and father, Jorge Arantes. After the divorce of the parents, Jessica now lives with her mom, Rowling.

Davis Rowling was born on 23rd May 2003. He is the first child of J.K Rowling and Dr, Neil Murray.

Mackenzie Murray is the second child of Dr. Neil Murray and J.K Rowling. Mackenzie is the youngest one.