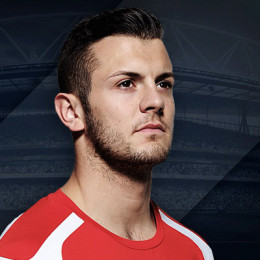 Jack Andrew Garry Wilshere is an English football player who plays as a central midfielder for English club Arsenal and the England national team. Wilshere was only four when he began to take an interest in football, and has always played above his age group since then.

England star Wilshere, who was dating Lauren Neal, became a father at the age of 19. Lauren is by three years elder than him and had been dating since 1997. She is a hairstylist by profession. The pair had ended their relationship at the start of 2011 when 22 years old Lauren was pregnant at that time. The ex-couple who have split, but still close to each other have two children.

Jack Wilshere was born on January 1, 1992, in Stevenage, England. His father, Andrew is a West Ham fan and mother, Kerry supported Arsenal.

At the age of 16, he made his first-team debut in 2008, becoming Arsenal's youngest ever league debutant. At the age of 18, he made his debut for the senior team against Hungary, making him the 10th youngest debutant in England's history. The naturally gifted player has previously represented his country at under-16, under-17, under-19, and under-21 levels. The brightest talent in the Premier League has made seven appearances for the senior England squad.

Delilah Grace is second child of Lauren and Jack born on September 26, 2013. The happy player shared a sweet candid of him and his little girl on Twitter, by holding the newborn.