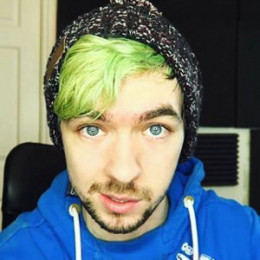 Jacksepticeye is a well-known YouTuber who gained popularity from his self-titled YouTube channel. His channel has millions of subscribers and earned millions of views at present. He started his YouTube career in 2012 and started gaining massive followers after being mentioned in a PewDiePie video in 2013. He started making YouTube videos after completing his graduation.

Early Life and Education of Jacksepticeye

Seán William Mcloughlin was born on February 7, 1990, in Athlone, Ireland. He is Irish and belongs to Caucasian ethnic background. He is the youngest son born to the family. He has two brothers and two sisters. His siblings are Allison, Susan, Malcolm, and Simon.

Mcloughlin resided in the countryside with his parents during his childhood days. Later, he moved to a cabin in the woods with his family.

Mcloughlin has lived in an apartment in Athlone, County Westmeath, Ireland. His sibling Malcolm currently resides in France.

Mcloughlin studied Music Technology but did not complete the college. He later studied Hotel Management and graduated with a degree.

Mcloughlin started his YouTube career in 2012. He created his self-titled channel on February 24, 2007, and started uploading videos on November 12, 2012. He has posted gameplay videos on his channel. He starts all of his videos by saying, "Top of the mornin' to ya ladies! My name is Jacksepticeye!" which is the reason he calls himself the most energetic video-game commentator on YouTube.

Mcloughlin gained massive popularity after being mentioned in a PweDiePie video in 2013. Currently, the channel has millions of subscribers and earned millions of views. His famous videos include The Escapists, Subnautica, The Sims 4, Grand Theft Auto 5, SKATE 3, Happy Wheels, No Oxygen Included, Surgeon Simulator VR, and Undertale.

Mcloughlin has co-starred as the antagonist of the second season of the show, Scare PewDiePie. However, the show was canceled before its release. He has featured on a television block named D | XP on the Disney XD channel.

Mcloughlin’s net worth is $9 million at present. He has millions of subscribers with billions of views for more than thousands of videos. As per some online sources, his YouTube channel has made $8 million in revenue and brings around $300,000 per month on average.

Mcloughlin currently resides in Brighton, England. He enjoys playing all kinds of games ranging from AAA games to flash games and cites Shadow of the Colossus as his favorite game.

Mcloughlin is not married yet and has no children. He is in a relationship with his girlfriend, Signe who is from Denmark. His girlfriend is a digital artist and has a YouTube channel titled Wiishu. Signe often posts Mcloughlin’s fan art on Tumblr.

According to Mcloughlin, he met his girlfriend, as she was his fan. They began talking on Tumblr and became friends entering a romantic relationship. The couple currently resides in Brighton.