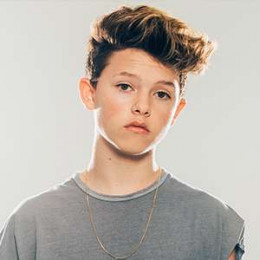 Singer, Comedian and internet personality, Jacob Sartorius was raised in Reston, Virginia by his adoptive parents. In 2014, he uploaded online video named 'Vine', a message about anti-bullying. On 3rd May 2016, Sartorius signed to an independent record label and released his debut single called "Sweatshirt". Moreover, on 13th September 2016, he announced the All My Friends Tour, a solo mini-tour where he performed in 6 cities.

Jacob Sartorius was born on October 2nd, 2002, in Oklahoma, Unites States. His biological parents were not able to take care of him so he was adopted and later moved to Virginia. His adoptive parents raised him in Reston, Virginia.

He discovered his talent for singing when he started participating in various musicals at the minor age of 7. In the year 2014, when hew as 11-year-old, Jacob uploaded a video on Vine.

The video was all about anti-bullying and it was made viral on the social media platform. During his early childhood, he used to be bullied which led him to make that anti-bullying video.

Subsequently, after joining Vine, he made an account in the app, Musical.ly. It was there, Jacob's career as an internet personality took it off into next level. His lip-syncing video became an instant hit and he became one of the most followed users in the app.

As Jacob used to share videos regarding anti-bullying, he started getting bullying more often than not. Not only simple bullying, he was even verbally attacked, pushed, and teased by his own classmates.

But he didn't let all this negativity let him down as he launched his debut single, Sweatshirt on May 3, 2016. The song was an instant hit and even peaked at No. 90 in the US Billboard Hot 100.

He soon released two other singles titled "Hit or Miss" and "All My Friends".

Jacob Sartorius is the son of Rolf, a president of the organization that combats social issues. His social media is managed by his mother, who often appears in his Vine videos. Sartorius has an older sister named Caroline.

Talking about his current relationship status Jacob Sartorius is reportedly dating Disney star, Millie Bobby Brown. The couple is dating for quite sometimes but their relationship was once plagued with problems when a girl accused Jacob of asking for nude photos.

At one time, it was reported he had parted ways with his girlfriend but seem they are back together.

He was also rumored to be dating actress Jenna Ortega. The couple was relationship goals but they broke-up due to some differences between them.

According to many sources, Jacob Sartorius is currently worth $300k. The major source of his income is his career as an internet personality and a singer as well.

One of his songs even made it to the billboard top 100 lists which in itself is a big feat. Many of his albums sold over thousand copies and his earning from those would be around $50k.