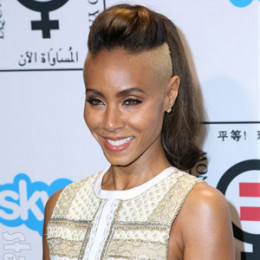 An American actress, businesswoman and singer-songwriter who is better known for her appearance in the TV series named "A Different World" which was produced by Bill Cosby. She is daughter to Adrienne Banfield-Jones and Robsol Pinkett, Jr. She was named after her mother's favorite actress Jada Rowland. In 1989 she graduated from Baltimore School for the Arts. Later she moved to Los Angeles, California to start her career in show business. In 1990 she started her career by starring in an episode of TV series named True Colors. She was also featured in dramatic movies like Set It Off and Menace II Society. Madagascar, Madagascar: Escape 2 Africa, Madagascar 3: Europe's Most Wanted, Scream 2, Ali, The Matrix Reloaded, The Matrix Revolutions are some of noticeable movie she has starred on. Beside acting she started her career in music by forming metal band named Wicked Wisdom. She also has her own fashion label named, Maja.

Talking about her personal life she is happily married woman. She is married to famous American actor whom she met on 1994. But she officially started dating him a year later in 1995. Couple's marriage was held two year later in 1997 in presence of the 100 guests who attended their wedding that was held at The Cloisters. Couple's blessed with two beautiful children. Prior of marrying him she also dated famous American rapper and actor who is better known as 2pac.

First Marriage with Will Smith

They first meet each other during the auditions for Lisa Wilkes in the Fresh Prince of Bel-Air. After two years of their first meeting they got married with each other. They are considered as very iconic couple. Both of them are very active in charitable works too. Together they are parents of two child.

Following his father steps he is also an actor and also rapper. He is famous for starring in the movie named The Karate Kid.

Like her brother she is also very talented girl. she is an American singer, actress and dancer.