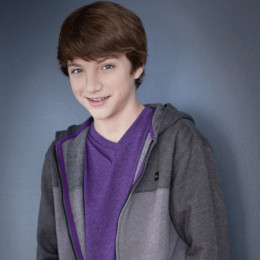 An American actor who is widely popular as Nose Noseworthy in the 2009 family comedy film, Shorts and as Fletcher Quimby on Disney's A.N.T. Farm among his fans. He has one brother and two sisters. He was raised by his grandparents in California. From his young age, he was avid fan of football. He started his career in 2007 at the age of 10 in movie named The Anna Nicole Smith Story. He has also starred in TV series A.N.T. Farm alongside with Sierra McCormick. In 2010 he was awarded with a Young Artist Award for Best Performance for his role in movie, Shorts.

Talking about his relationship status he has not married yet. It seems like currently he is single. He was in relationship with his co-star in TV series, A.N.T Farm. Everything was going well for a year but after a year they began to be busy in their own schedule and the relationship faded out slowly and eventually they broke up. There has been no rumor of him dating anyone currently. He is a regular user of twitter, his fan can follow in his official twitter account @TheJakeShort to be more updated about him.