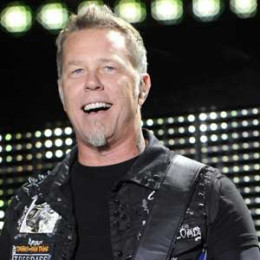 An American lead singer, musician, and songwriter, James Hetfield is best known from his American Heavy metal band, Metallica and is also the co-founder. Most of his songs were inspired by his childhood incidence, his mother's death, and his struggle. James is married to his wife, Francesca Tomasi and has three children together.

James was born to Cynthia Bassett (a light opera singer) and Virgil Lee Hetfield (a truck driver) on 3rd August 1963 in Downey, California. He is an American and comes from different descents, English, German, Irish and Scottish.

James was raised along with his two half-brothers from his mother's first marriage and his own sister. When he was 13 years old, his parents divorced.

His mother died of cancer in 1979, and in 1996 James's father passed away. After his mother's death, he lived with his half-brother David.

James finished his schooling from Downey High School. Since childhood, he was very much interested in music.

At the early age of 9, he joined piano classes, and after that, he took drum classes along with his half-brother David and latterly learned to play guitar at the age of 14. During his teens, he was involved in many small bands including- Leather Charm, Obsession.

His life turned after seeing an advertisement in the newspaper, about an opening in a band. A heavy metal spirit drummer, Lars Ulrich had published that he was looking for a person to jam with.

After that James joined him and the two formed the heavy metal band, the Metallica in October 1981. Later on, guitarist Dave Mustaine and Bassist Cliff Burton joined the band.

At first, James didn't take initiation to lead the band, but afterward, he became one to make the band popular. In 1983, Kirk Hammett replaced Dave Mustaine and shifted to San Fransisco to record their debuted album.

They were rejected and thrown away from several recording studios due to their aggressive and metallic voice. During that time the metal music was not preferred by the audiences.

However, the group took the risk and released their first album in 1983 named, ''Kill Em All'' which was shockingly a success in the market and earned a lot of fans. In 1984 they released their second album, Ride the Lighting which was also a hit.

In 1986 while they were touring to promote their third album, ''Master of Puppets'' some unexpected incident took place. The band members were traveling by a tour bus, and accidentally the bus hit a patch of black ice.

During the incident the bassist Cliff Burton was thrown away from the bus and died on the spot. All the member were shaken up and were very emotional. The promotion was also delayed for some time. After many days they decided to add bassist Jason Newsted and started touring again.

Furthermore, after two years of Cliff's demise, James, and drummer Ulrich decided to take an unanticipated direction for the band and released their first music video, One in 1998. The song included in the album Right the Lightning. The album gained huge success, and their music video was one of the topmost requested video on MTV.

James and Ulrich were not satisfied with all this. Their dream was to take their music to another level, so they hired a music producer, Bob Rock. Furthermore, they released another album in 1991, The Black Magic. The album took them to the next level popularity and fame. But during the popularity, the giant leaders, James and Ulrich had cold war and had many conflicts even while recording the album.

In 1992 when Metallica toured with Guns and Roses to promote their album. At that time a flame broke down on the stage and James was severely burnt. He suffered second and third-degree burnt on the left side of his body. It took almost three weeks to recover and to make a comeback in the band.

In 2001 Jason Newsted left the band as James was addicted to drugs and alcohol at the time. Hence he was sent to rehab while the group was working on their album, St. Anger in 2003. During the same year a documentary film, Some Kind of Monster released which showed the relation between the band members and the hard work behind making an album. It earned $2.009 million box office collection.

In 2001 they released their 8th album, St. Anger. It was the least successful album of Metallica. However, they worked hard and made a come back from the 9th album, Death Magnetic in 2008. In 2011 they collaborated with singer-writer Lou Reed and released Lulu which also did not match the expectation of the audiences.

Recently, they are touring the USA playing songs from their albums- Lords of Summer, Spit Out the Bone (music video), Now That We're Dead and so on.

Moreover, James is also a brand ambassador of ESP Guitars since 1989.

In many of Hetfield's interview, he has mentioned his wife's contribution to his success and the way he is now. Francesca was with James throughout his battle against addiction towards drugs and alcohol.

The couple together has three children- Cali, Castor, and Marcella. The family is having a wonderful time together, and still today there is no such news about them splitting up.

The famous vocalist, James Hetfield has an estimated net worth of $175 million. The family is living a high profile life and is happy together. His house is in San Rafael, California which he bought for $4.45 million in 2000.

He owns a beautiful Black Pearl which has a Ford V8 engine. Hetfield's car won the Custom of the Year Award in 2014.

James Hetfield and his wife, Francesca Tomasi got married on 17th August 1997. The couple now has 3 children together.

Cali is the elder child of James Hetfield and Francesca Tomasi. She was born on 13th June 1998 in Sea Francisco, California.

Castor is the only son of Francesca Tomasi and James Hetfield who was born on 18th May 2000.

The younger baby girl of Francesca Tomasi and James Hetfield is Marcella. She was born on 17th January 2002.