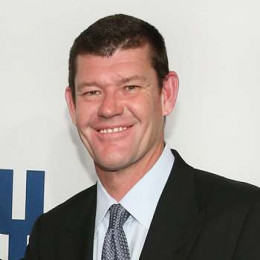 James Douglas Packer is an Australian businessman, investor and philanthropist, best known as the chairperson of Crown Limited, one of Australia's largest entertainment and integrated resort groups. He is the former executive chairman of Publishing and Broadcasting Limited and Consolidated Media Holdings. As of Jan 2016, he has a Net-worth of US$3.5 billion. He was born to Kerry Packer and Roslyn Redman Weedon.

Moving on to his personal life, till now he has been married twice and both the time he separated with his wives legally. He was married to his first wife for nearly three year and got divorced. After the divorce, he was married to a singer from 2007- 2013 and have welcomed three children together. Currently, he is engaged to an American singer, songwriter and actress.

She is the first wife of Packer, who by profession is a fashion designer, former glamour model and television personality. The two were married at Bellevue Hill, Sydney in 1999.

She is the second wife of Packer, who by profession is a singer and model. They are blessed with two daughters and a son.

He is the second child and only son born to Packer and his wife.

She is the youngest member in the house who these days is busy attending her school.