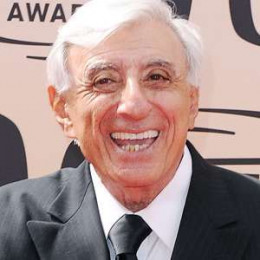 Jamie Farr, an American film and theater actor, is currently married to Joy Ann Richards since 1963. He was born to mother Jamelia M, a seamstress, and father Samuel N. Farah, a grocer. Jamie completed his schooling from Woodward High School. Later, he went to Pasadena Playhouse where a Metro-Goldwyn-Mayer talent scout discovered him offered a screen-test for "Blackboard Jungle". This was the beginning of his career.

Jamie Farr is known for his thick and nasal voice. He has also published an autobiography titled "Just Farr Fun". Farr has also written a children's story, Hababy's Christmas Eve, along with his wife. He once battled severe rheumatoid arthritis. Farr has been involved in the St. Jude Children's Research Hospital Professional Advisory Board. He is married to Joy Ann Richards and has two children, a son, and a daughter.

Jamie is married to Joy Ann Richards since February 1963. They have two children together. As of now, there are no signs of their separation.

Joans is the first child of this couple. There is not much information about him on the internet.

Yvonne is the second child of this couple. There is not much information about her on the internet.