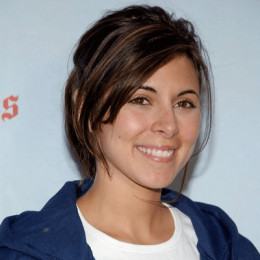 Jamie-Lynn also known as J Lynn is an American actress and singer. She has played as Meadow Soprano on the HBO series called The Sopranos. She is best known for that role. She began acting and singing from the age of 7. Her parents are Connie and Steve Sigler. She has appeared in different TV series like Guys With Kids, Entourage, How I Met Your Mother, Ugly Betty and Higgly Town Heroes. She has won and been nominated in many awards for The Sopranos including the Screen Actors Guild award as "Outstanding Performance by an Ensemble in a Drama Series" and Young star award as "Best Performance by a Young Actress in a Drama TV Series".

Sigler married her manager Abraxas Discala whom she had been dating before she turned 21 on 11 July 2003. After marrying Discala she had changed her name as Jamie-Lynn DiScala which she resumed after the couple separated in September 2006.

This is our relationship in a nutshell. Happy valentines to my forever guy who takes the best care of me and our boys (especially the furry one). I live for you @cutter_dykstra

After few years, on 2008 she dated Jerry Ferrara, while guest-starring on Entourage. The romantic relation lasted for a year. She also dated football player Mark Sachez and Scott Sartiano. She got engaged to baseball player Cutter Dykstra on 2013 and on August in the same year gave birth to their son Beau Kyle Dykstra on 28 August.

The couple tied the knot on 16 January 2016 in Palm Springs, California. They welcomed their second son Jack Adam Dykstra in January 2018.

She revealed in January 2016 that she was diagnosed with multiple sclerosis when she was 20 years of age.

She revealed her health issue in an emotional essay on Shondaland.com,

“When I learned I was pregnant with my first son, Beau, six years ago, I was terrified. All of a sudden, I had to think about how my MS would affect someone else. (I say this because my husband has made me feel since day one that this disease had no negative effect on us as a couple.) But with my son, his safety depended on me!”

She revealed how MS affected her role and responsibility being a mom of two. She mentioned that she repeatedly talk over what else to do if tragedy will ever strike in their life.

"I even, sadly, had to have the talk with my husband about what we'd do in the worst of circumstances, where I thought out loud: If there ever was a mass shooting, you have to take the kids and run, and trust I will do my best to stay safe. Just thinking about this still makes me tear up."

Jamie-Lynn Sigler was born on 15 May 1981 IN Jericho, New York. She is renowned for her performance as Meadow Soprano on the HBO series The Sopranos.

She co-authored her autobiography Wise Girl: What I've Learned About Life, Love, and Loss in 2002.

Discala and Sigler got married on July 11, 2003 at the Brooklyn Botanic Garden in New York. They separated in 2006.