Jamie Sierota is the former lead guitarist and back vocalist of the pop band, Echosmith. The band was formed in 2009 by the group of Sierota siblings but they first released their album in 2012 after signing a contract with Warner Bros. Records. In 2016, he left the band in order to take care of his newly born baby. He married his girlfriend, Ana Sierota.

Jamie Sierota was born on April 8, 1993, under the birth sign Aries in Chino, California, United States. His birth sign is Aries defines his personality as passionate and independent who are natural born leaders who know how to take charge. He was raised with his three siblings, Noah Sierota, Graham Sierota, and Sydney Sierota.

Jamie Sierota is professionally a guitarist and musician who co-founded an indie pop band named Echosmith along with his siblings Sydney, Noah and Graham Sierota in 2009. At first, they used to do cover songs but after signing a contract with Warner Bros Records in June 2013, they released their debut album, Talking Dream which was commercially successful. 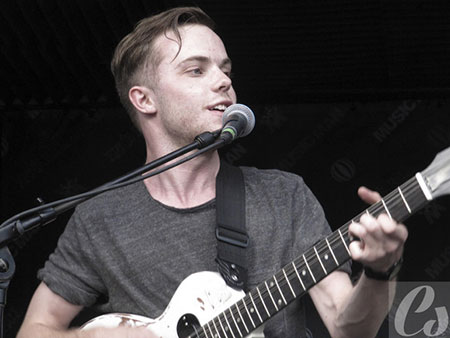 Their debut single, Cool Kids subsequently became a sleeper hit, peaking at number 13 on the Billboard Hot 100 and certified double platinum by the RIAA with over 1,200,000 sales in the US. It also received an airplay on US modern rock, contemporary hit radio stations and hot adult contemporary.

In August 2016, Jamie Sierota announced that he would be taking a break from the band in preparation for fatherhood and in November, the band officially announced that Jamie will no longer be part of the band. He was replaced by guitarist Joshua Murty who toured with them in their fall tour.

Sierota played the guitar for a cover version of Ellie Goulding hit single Lights. He has appeared in Television shows like The Tonight Show Starring Jimmy Fallon, Live! with Kell, Conan, Late Night with Seth Meyers and so on.

Jamie Sierota is a rising musical star who is best known for his guitaring skills and melodious voice. Previously, he was a lead guitarist of the indie pop band, Echosmith and currently he does solo musical pieces. He earned around $100k-$135k from his stage performances and considering his career growth, his net worth isn't less than six digit figure.

Jamie Sierota is a married man who exchanged vows with his longtime girlfriend, Ana Sierota in an intimate ceremony in 2014 in the presence of their friends and family members. The duo is blessed with a baby boy named Django Sierota in December 2015.

Sierota is quite active on social sites, especially on Instagram where he has 20.7k followers. He often shares the pictures of his family and travels on Instagram. He has over 24.9k followers on Twitter. In his body, he has a tattoo of a bible verse on his lower arm and has the initial of his wife's first name on his left ring finger.

He has a well maintain physique and stands a decent height.

Here is a video of Jamie Sierota's band Echosmith talking about their 2013 Vans Warped Tour.

Ana Sierota and Jamie Sierota tied the knot in 2014 at an intimate ceremony in the presence of their closed ones. The duo is blessed with a baby boy, Django Sierota born in December 2015.

Django Sierota was born on December 2015. He is best known as the son of singer and guitarist, Jamie Sierota.