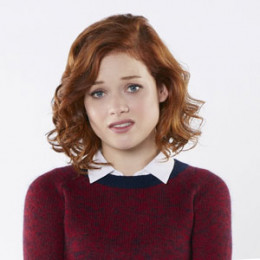 Fright Meter Awards nominee for Best actress, Jane Levy is popularly known for her role as Tessa Altman, a leading character on the ABC comedy series Suburgatory in 2011 up to 2014. She made her debut as Mandy Milkovich in the Showtime drama 'Shameless.' She had supporting roles in the 2012 films named Fun Size and Nobody Walks.

Jane Levy was born on 29th December 1989 and grew up in Marin County in Northern California.She is the daughter of Mary Levy, an artist, and Lester Levy, a musician. She has a brother named Simon Levy. She holds American nationality with white ethnicity.

At the age of seven, she was in the musical, "Oklahoma" and quit acting at the age of thirteen to play soccer.

Jane Levy began her acting career in community theater productions of The Wizard of Oz and Annie in high school.Moreover, she was the captain of the soccer team and performed with the hip-hop dance team.

After moving to Los Angeles in 2011, she landed a recurring guest role on the hit HBO series called Shameless alongside William H. Macy and Emmy Rossum.

Levy is well known for her role as Tessa Altman on the ABC comedy series 'Suburgatory' also her TV debut on Showtime's Shameless. She performed in two movies in 2012 including Fun Size and Nobody Walks. Levy was named as one of the breakout stars of 2011 by critics, and Forbes named her on their list of 30 under 30 who are "reinventing the world."

Levy is well known as the star of a new film called 'This Is Where I Leave You' and was photographed .' the red carpet for the Los Angeles premiere of the film at the TCL Chinese Theatre on 15th September 2014.

Levy got a lead role in the highly anticipated movie of Bharat Nalluri's thriller, In a Dark Place in 2014.

The talented actress can be seen starring in the critically acclaimed horror flick Don't Breathe (2016) and the family-friendly adventure comedy Monster Trucks (2017).edules have prevented the two from actually filing for divorce, until now.

In 2017, Levy served in 'I Don't Feel at Home in This World Anymore' directed by Macon Blair and will star in zombie comedy Office Uprising. Also in 2017, she will appear in the Showtime series called 'Twin Peaks'.

The news of the divorce and the marriage for that matter may come as a surprise to many as only two people knew about their marriage until their divorce was announced.

Her ex-husband Jaime Freitas is a Portuguese actor worked in the likes of Cigano, Cisne and O Cacador. Her ex-husband is the LA-based performer who worked as a writer, producer-editor, and director on many little-known projects.

On 3rd March 2011, Jane Levy married Jaime Freitas, the Portuguese actor who worked in the likes of Cigano, Cisne and O Cacador.