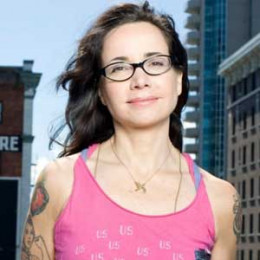 An American stand-up comedian, actress Janeane Garofalo is also an author and a host too. She is mostly known for ''The Ben Stiller Show''. Janeane gave her voice to an animated movie, Ratatouille which was a blockbuster of the time. She is officially single now and is enjoying her life.

Janeane was born on 28th September 1964 in Newton, New Jersey. She is the daughter of Carmine Garofalo and Joan Garofalo. Her mother was a secretary of a petrochemical industry who died of cancer when Janeane was 24. Her father is the former executive of Exxon, natural resources, and oil company. She is the citizen of United States and comes from mixed descent as her parents are of different ethnicity- Italian, and Irish. Janeane grew up in different places like-California, Ontario, Katy, Texas, Madison and New Jersey and was raised in a Catholic family.

Janean graduated in history from Providence College. During college, she participated in a comedy talent show sponsored by Showtime, an American premium cable and television networking site that broadcast their own shows. Garofalo won the title of Funniest person in Rhode from the Showtime. Moreover, she did stand-up comedy in various places of America to pursue her career.

During the 1990s her television and film career began to flourish. In 1992 she joined The Ben Stiller Show, a sketch comedy series. From this series, she uplifted her career and met her ex-boyfriend, Ben Stiller too. Moreover, in 1994 she appeared on NBC's Saturday Night Live.

Janeane is also an author. Some of her famous books are- ''Feel This Book: An Essential Guide to Self Empowerment., Spiritual Supremacy, and Sexual Satisfaction'' as a co-writer with Ben Stiller which was one of the best seller comedic book in 1999.''HBO Comedy Half-Hour' is another book with Ben Stiller, and she also wrote a series, Head Case in 2001.

Besides these, she was also a co-host along with Sam Seder for ''The Majority Report'', a new show of Air America Radio Station. Garofalo was also given a role in Ratatouille, a famous animated movie to give her voice to a strong feminist chef, Colette in 2007. The character matched her personality as she is also a feminist. This movie was a globally blockbuster movie of the year.

Later on, in 2011 she appeared in ''Criminal Minds: Suspect Behavior'', a CBS drama series. Garofalo was nominated for Emmy Awards many times.

Janeane Garofalo was in relation with Rob Cohen in the early 1990s. Rob is the producer of the most famous show, ''Big Band Theory''. After a year they got married unknowingly at Las Vegas as both of them were drunk. It was an informal and unplanned wedding. Both of them were unaware that they were married and knew about it after 20 years when Rob's lawyer did a deep research. Janeane announced it in a New York Comedy Festival reunion for the Show, ''The Ben Stiller Show''. They separated, and now Rob is married to the producer of ''Jimmy Kimmel Live'', Jill Leiderman.

Garofalo was in another relation with Ben Stiller. Their official dating started from the show, ''The Ben Stiller Show'' in 1992. The couple had done many shows together and also published several books together too. Later on, they split up, and she is single now.

The comedian, Janeane have an estimated net worth of $10 million. She owns a house in Houston, Texas. Janeane's videos on YouTube has more than thousand views which show her popularity among the fans and audiences.

The producer of a Big Bang Theory, Rob Cohen, and Janeane Garofalo were in relation in the 1990s. Later on, after a year they got married unknowingly in Las Vegas as both of the were drunk.