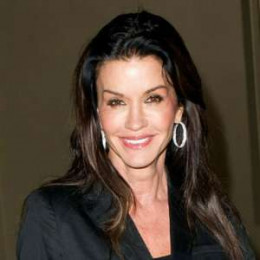 American model Janice Dickinson is active in the industry for years and has undoubtedly made an impressive net worth. Apart from her professional life, the star is married for the fourth time.

An American model, photographer, author, and talent agent, Janice Dickinson is a married woman. Dickson tied the knot to her fourth husband Robert Gerner in 2016. The couple dated for months before tiding the knot.

Dickinson was previously married to Ron Levy from 1977 to 1979 and Simon Fields from 1987 to 1993. Simon and his ex-wife have one child named, Nathan Ray Michael Fields who was born on May 5, 1987. Then Dickinson married Alan B. Gersten on 14 February 1995 and they divorced in 1996. Dickinson was also in a relationship with Michael Birnbaum and they shared one child named, Savannah Dickinson, who was born on February 23, 1994.

Janice Dickinson has the net worth of not less than $1 million. The star makes the amount from her career as a model.

Janice Dickinson was born Janice Doreen Dickinson to Jennie Marie and Ray Dickinson on 16th February 1955 in Brooklyn. She was abused emotionally and physically when she was a child.

The star moreover appeared on the cover of Elle seven times in a row and has been the face of ad campaigns for products such as Revlon, Alberto VO5, Balmain, Clairol and much more. Janice also made a guest appearance on Season 5 of America's Next Top Model.

For more update about your favorite celebrity, visit marriedwiki.com.

She married to Ron Levy on 26 March 1977 but they did not continue their marriage relationship and they divorced on 9 January 1979.

She married to Simon Fields married in 1987 but they ended their marriage relationship in 1993 they have one child.

Third Marriage with Alan B. Gersten

Then she married to Alan B. Gersten on 14 February 1995 but the couple ended their relationship in 1996.

He is the first child of her named,Nathan Ray Michael Fields who was born on May 5, 1987.

She is the second child of her named, Savannah Dickinson, was born on February 23, 1994.